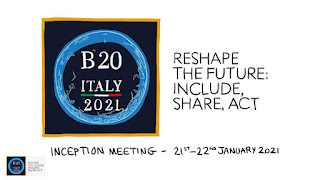 The B20 is the official G20 dialogue forum with the business community. It numbers on average 1.000 delegates from the G20 countries, including top executives from the major multinational corporations, collectively representing over 6.5 million businesses.
We want to ensure truly sustainable economic growth by conveying enforceable recommendations that combine economic growth, environment protection, human and labour standards. Climate change, circular economy, resource efficiency, and clean energy transition will be greatly under focus.
(From their website)
We look forward vaccinations campaigns to be conducted in emerging and least developed Countries as massively as they are ongoing in advanced Countries. We will advocate for the adoption of Connected Care in the Health & Life Sciences sector and of outcome demonstration & value recognition new technologies.
Our commitment to invert protectionism and unilateralism and to restore a sound multilateral governance is firm.
The reform of the World Trade Organization stands high in our agenda. We also aim at making global value chains more resilient and inclusive, while improving their corporate integrity and compliance. We will address the need of financial cooperation and inclusion in the framework of the sustainability of  the global financial and infrastructure ecosystem.
A common rulebook and harmonized standard and regulatory frameworks are needed to support and to govern the digital transformation, to reduce the digital divide, and to favour public and private investments in network technology and in digital skills. Education is more than ever key to the development of an inclusive labour market.
G20 Countries must engage in a widespread modernization of educational systems with the aim of upgrading the totality of the workforce, while devoting special efforts to Youth and Women.
In the lead for the B20 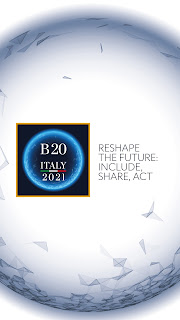 The General Confederation of Italian Industry (Confindustria) will host the 2021 edition of the B20. The 2021 Italy B20 is chaired by Emma Marcegaglia, Vice Chair and CEO of Marcegaglia Holding, as well as former President of Confindustria, BusinessEurope and ENI. GO TO ENGAGEMENT GROUP WEBSITE
The Business 20 have the following priorities
On the 21st of January, with the Inception Meeting, is officially started the B20 Summit, the most
authoritative of the G20’s Engagement Groups. Reserved to companies and business organizations,
this year’s B20 is hosted by Confindustria, which has made a first-hand commitment to supporting
the Italian Presidency. Chairwoman Emma Marcegaglia, nominated by Confindustria’s President
Carlo Bonomi to lead the B20, will coordinate the work and draft proposals from the business world
to be submitted to political leaders.
The 2021 B20 is particularly crucial, coming at a time when global economies are struggling to deal with the effects of the pandemic, while major changes on the international scene could alleviate geopolitical tensions. With the arrival of the vaccine and in the hope that it will be distributed widely and quickly, the B20 team has identified some very ambitious challenges for this year: from climate change to the dissemination of innovation, and encompassing the promotion of sustainability and the reduction of inequalities. These goals are reflected in this year’s claim: “re-designing the future: including, sharing, acting”. Indeed, according to the business world, 2021 will have to usher in social, economic, and environmental regeneration on a global scale, a process that will provide a strong impetus for economic growth.
“This G20 will not just be for show, we must be incisive and the conditions are in place to do so.
When the G20 has had to grapple with crises, it has achieved results and more efficient proposals.
Today, it is up to us to find a way out of this emergency”, said Emma Marcegaglia.
Participants in the B20, which was established to issue policy recommendations for the holder
of the rotating Presidency in a variety of strategic sectors, include 1,000 delegates representing
G20 counties and corporate executives, for a total of 3,000 participants representing a business
community of over 6.5 million firms.
The process will unfold through 8 Task Forces comprising  about 100 delegates each, coordinated by Chairwoman Emma Marcegaglia and led by the CEOs of Italy’s leading companies:
The roadmap calls for each Task Force to convene once a month via teleconference from February
to July, in order to define the contents of their respective policy papers and the recommendations to
be forwarded to the G20.
The B20 Final Summit will be held on 7-8 October, about three weeks prior to the G20 Summit of state leaders, and will include the consignment of the “Final Declaration”  to the Italian Prime Minister, in his capacity as G20 Chair. In parallel, over the entire year of Italian presidency, the B20 will be present at all key international economic conferences and the many events that will be held under the aegis of the G20, both in Italy and abroad.
The B20’s governance is rounded out by the “International Advocacy Caucus”, a body staffed by
CEOs and corporate leaders from G20 countries and appointed by the B20 chairmanship. Its members will serve as “B20 ambassadors” and increase its visibility through their networks while promoting its recommendations, including with their own national governments.
B20 business 20 G20 Italy