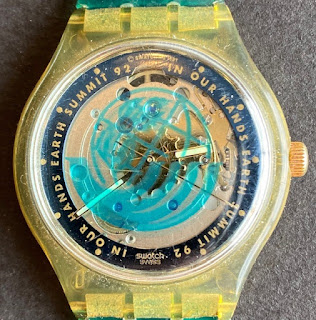 The first-off-the-line “Earth Swatch” watch, designed by climate activist and sustainable development pioneer Maurice Strong for the 1992 Rio Earth Summit, with the theme “In Our Hands,”

The watch was given to Mr. Strong’s widow, Hanne Strong, by the wife of Swatch founder Nicolas Hayek. Ms. Strong, in turn, is donating the watch for the “cyber auction.” This Earth Swatch will be given an eternal digital life with certified ownership and authenticity. And here is the link to the NFT auction

Comments at the launch by Felix Dodds

I always thought that Maurice Strong was a unique individual someone who cared deeply about people and particularly those who were more vulnerable than others but in his life he gained such a unique perspective having worked as a Canadian oil and businessman, setting up and on the boards of NGOs, establishing the becoming the first Executive Director of the United Nations Environment Programme and the UN Under Secretary General of not one but two UN Conferences on the Environment. Thus helping to create an astonishing diverse network  of people and interest groups.

The achievement of the Rio Earth Summit was extraordinary:

The core text was Agenda 21 a 40-chapter blueprint for how to approach the 21st century it covered social, environmental and economic sectors as well as for the first time recognizing nine stakeholders in society including industry and NGOs but for the first time giving unique space to young people and Indigenous Peoples as well as women. All this backed up by a Global Forum of over 50,000 stakeholders attending workshops in a Flamenco park.

It has a huge impact since as a concept in giving space for these stakeholders not only in intergovernmental processes but also in national, local and community processes. The idea of stakeholders can be traced back to Agenda 21 and to work of Maurice Strong.

The second main outcome was meant to be the Earth Charter but that didn’t happen and a much more reduced though still important document was negotiated the Rio Declaration 27 principles to guide us such as the polluter pays principle, the principle of prior informed consent, the right to development, common but differentiated responsibilities.

The third outcome that was critical were the two conventions on Biological Diversity and Climate Change.

What many people do not realise is that in addition to the two agreed at Rio within two years a third was added on desertification and the additional push from Rio saw the Conservation and Management of Straddling Fish Stocks and Highly Migratory Fish Stocks agreed three years later.

Finally the chemical chapter of Agenda 21 started a process that culminated in negotiating two other conventions that on Persistent Organic Pollutants – known as the Stockholm Convention Prior  and the Informed Consent Procedure for Certain Hazardous Chemicals and Pesticides in International Trade – known as  Rotterdam Convention.

So six international regulatory environmental conventions were birthed due to the work Maurice did in setting up and managing the Earth Summit.

Perhaps many listeners don’t realise that the first UN Conference on the Human Environment held in 1972 in Stockholm included in its outcome:

“That governments mindful of activities in which there is an appreciable risk of effects on climate should carefully evaluate the likelihood and magnitude of climatic effects and disseminate their finding to the maximum extent feasible before embarking on such activities and consult with other interested States when activities carrying a risk of such effects are being contemplated or implemented.”

June next year will be 50 years since that warning was made.

Maurice continued in the run up to the Earth Summit in 1992 to lobby for action on climate change and helped set up the Intergovernmental Panel on Climate Change to help build the science argument as Rio agreed the Framework Convention on Climate Change.

This year will I believe see a huge result of all that work that Maurice was at the center of over nearly five decades.

Add to that yesterday the launch of the Glasgow Financial Alliance for Net Zero which included 43 banks from 23 countries with US$ 28.5 trillion in assets now aligning their lending and investment portfolios with net zero emissions by 2050 the finance sector will now become a huge driver. In the US the banks that have signed on ate Bank of America, Citi bank and Morgan Stanley.