The Noble or Nobel Prize - a fiction story

*Inspired by a tweet by Michael Strauss. Shared because of what happened in the capital on the 6th of January 2021. 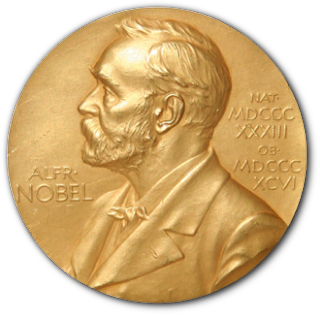 Once upon a time a long long time ago Alfred Nobel who had made his money from manufacturing cannons, dynamite (inventor) and other armaments read a premature obituary mistaking the death of his brother Ludvik for Alfred. The obituary described Alfred as profiting from the sale of arms. This inspired him to leave his fortune to institute the Nobel Prize. Alfred was already on the run from France where he had lived and now was wanted for high treason for patenting and selling Ballistite to Italy one of Frances competitors. Alfred and his extended family were to spend the last years of his life in Italy and it is there that the story begins.

If this is to be believed Loki (named after the trickster), inspired by Alfred, would set up a secret annual award given in his name the “Loki Noble Prize” by a global cabal of kleptocrats & racketeers. Working, or so rumor has it, with a Friedrich Trump a German-American businessman who made his money from a restaurant and a brothel in Canada. It was Trump who mistakenly misspelled Ignatius name as Noble on the first award but then it was too late to change it. 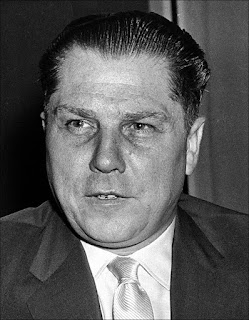 In 2020 the first ever Loki Award was found with the body of Jimmy Hoffa. Hoffa had disappeared on July 30th 1975 around Bloomfield Michigan. With the COVID 19 virus having spectacular impacts on our rivers and lakes a satellite had picked up a car in Lake Orion – a Lincoln, the last car that Hoffa had been seen in. Inside the car as well as the body was a sealed case and inside that the award was found with the names of the previous winners of the Loki Noble Prize up to 1974. Hoffa had won the award in 1973. Allegedly as the details are still to be released by the police the list of previous winners is a hall of fame of kleptocrats & racketeers including Al “Scarface” Capone, Ignazio "the Wolf" Lupo, Stefano "The Undertaker" Magaddino, Ronnie and Reggie Kray, Stephanie "Queenie" St. Clair, Benito Mussolini and Fulgencio Batista. Rumor has it that Hoffa won out to Augusto Pinochet in 1973 for the prize. Speculation is that Pinochet would win eventually the award in 1985 in the mid-term of President Reagan.

The Nobel Prize according to Alfred’s will was to be:

““annually distributed in the form of prizes to those who, during the preceding year, shall have conferred the greatest benefit on mankind.”

The Noble award according to legend was first given out in 1920 and subsequently:

“every five years distributed for those who has undermined the rule of law and governments ability to govern.” 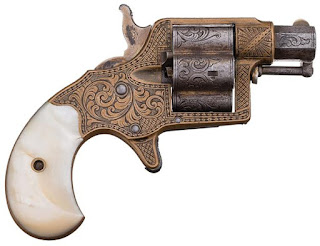 The physical award was the much sought-after Colt Cloverleaf. The Cloverleaf for the uninitiated in firearms was produced in 1871 by the Colt Patent Fire Arms Manufacturing Company. It was one of the first metallic cartridge rear-loading revolvers. Also famous for its spectacular engraver’s art by Louis Daniel Nimschke.

Nicmschke had also engraved firearms for many famous people including President Theodore Roosevelt, George Armstrong Custer, Buffalo Bill, and Napoleon III, Emperor of France. The gun sat in a beautiful antique wooden box which has engraved on its lid the names of all the previous winners.

There was a twitter storm in April 2020 – there have been so many - by President Trump on the “Noble Prize” where he said:

“When will all of the 'reporters' who have received Noble Prizes for their work on Russia, Russia, Russia, only to have been proven totally wrong (and, in fact, it was the other side who committed the crimes) be turning back their cherished 'Nobles' so that they can be given to the REAL REPORTERS & JOURNALISTS who got it right."

In light of the recent events explained above perhaps the President didn’t spell the name wrong but mixed the two prizes up. And just perhaps he is trying to win the Noble Prize and not the Nobel Prize.  If you add to the mix that it is rumored that the present chair of the Award Committee for the Noble Prize is thought to live in Moscow it surely must give us all food for thought. Perhaps explaining a lot of the President’s policies and actions over the last three and a half years and why he is, we understand, intending to attend the Hoffa funeral.