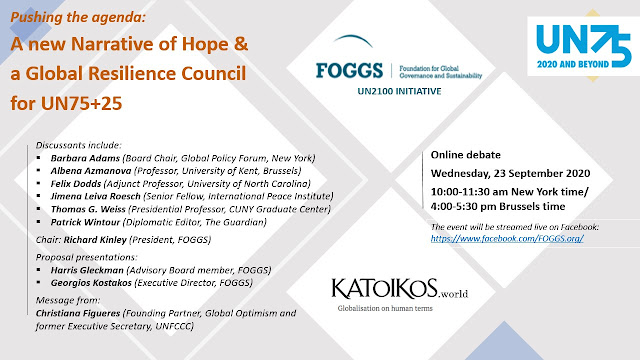 The discussion was based on two "zero draft" proposals -- a new Narrative of Hope and a Global Resilience Council -- and the just-published article by Georgios Kostakosa nd Richard, Harris
Here is my response to the papers

Thank you for the opportunity to comment on the proposal. I would also like to say at the beginning that these proposals are important to expand the conversation that is needed to end up with something stronger than what we have today … what we have is clearly not fit for purpose.

So I will make three comments to add to the debate:

We operate in the real world of 2020 and what is possible is defined by those in power today and their agenda.

There are times when after enormous work advancements can be made such as the SDGs and the Paris Climate Agreement.

Remember it took 5 years from Paula Caballero introduction of the idea of the SDGs in Solo Indonesia in July 2011 for the 2030 Agenda to be agreed upon.

Important to being able to do that was that there were positive governments in key countries such as USA, Brazil, South Africa, India, and many of the countries in Europe.

We don’t have that today so to advance any major proposal we would need positive governments in favor of multilateralism and we would need those opposing at the moment to be happy with the ideas so that they do not destroy them when they get into power.  We would need a narrative that the vast majority bought into.

I do not believe the non-state actors should have any membership of a new body with any voting rights. 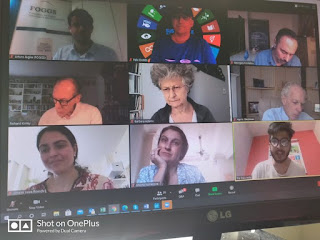 NGOs or stakeholders do not represent ‘the people’ very few are democratic, policy decisions are taken by a small number of people at the head of the organizations, many NGOs are an individual or a small group of individuals. There is a difference between advocacy NGOs and implementing NGOs – some do both but some do not.

I do think there is ground for setting up more formal bodies where stakeholders can inform and share their advice before governments make decisions.

A version of the old Commission on Sustainable Development would be worth relooking at from 1997 to 2002 the first two days of the CSD before negotiating started were given over to 4 three hours interactive discussion of 3 or 4 stakeholders with member states.  The only review of this I am aware of is the UNDESA review of the tourism dialogues where they said 70% of the outcome from the CSD was from issues raised in the dialogues.

I don’t see the possibility of a new body being created any time soon particular one which would take up similar space as the HLPF and bits of ECOSOC.

As some of you will know the reform of the HLPF was meant to be on the GA timetable for this October. It has been put off until next October which does offer the chance for reform. But its important to know not one part of the UN working alone will not operationalize any decision it is about the whole organization playing its role.

Stakeholder Forum, my former organization, had a ‘Pop-Up’ event at the HLPF in July Is the HLPF fit for Purpose?

After all it was set up before the 2030 Agenda and the SDGs were agreed to.

Stakeholder Forum just launched a report about the ideas from that. It seems some discussion between that initiative and this could be productive. Attending the Pop-Up event were all the P5 countries and the EU among others.

Whatever changes we would like to see will need to work out what ECOSOC would be doing in relation to the reformed HLPF or this Council?

The proposal for a Sustainable Development Council of the GA in 2012 was defeated because we could not come up with a good explanation of the different roles of ECOSOC and the SD Council.

Disruptive industries will change our lives completely in the next ten years it’s not just cyber its AI, biotechnology, AR/VR, cryptocurrencies, quantum computers, changes in mobility, new energy and even 3D printing to name a few. These will include inequality within and between countries.

These are the issues I am raising in my new book Tomorrows People the impact of disruptive industries on our lives by 2030 – taking the SDGs and the Paris Climate Agreement as the backdrop, It will be out for new year’s HLPF or UNGA.

My final comment I just to remind everyone of the Earth Charter which gives us a great ethical set of principles to engage with – we don’t need to reinvent the wheel.