Events will continue through August and September and will complete with ‘The Meal’ on 26th September in support of JaiJagat 2020.

Madras Café, or Madcaf, as it is fondly known, was first thought of at world music festival – WOMAD – in 1992, when two of the founders of Action Village India (AVI) arrived in a VW van with a pile of pamphlets and some chai. What started that year as a chai stall with ‘attitude’ is now a much appreciated annual feature of WOMAD serving freshly cooked, Indian, vegetarian, food to over 4,000 people during the four days.

Madras Café is the working name of Sensetrade Ltd, AVI’s trading arm.  It is managed and run by the Madras Café Advisory Group (MAG).  Over a 28-year period, several hundred people, young and old, have volunteered their time to organise and staff MadCaf outings.  The WOMAD week itself, annual maintenance work and necessary preparatory meetings, all add up to over 10 days a year of volunteering for many MAG members.

In a planned transition, a new generation of volunteers, is now stepping forward to take on roles within MAG.  Many of them, having had fun as children and then youngsters, accompanying their volunteering parents in their first 10/11 years at WOMAD, have moved up to take major roles in MadCaf’s outings alongside their parents – learning and mastering a variety of life skills.  One such skill being that, as teenagers, they often found themselves required to direct adult volunteers how to perform the task at hand.

Beyond a sustained major presence at WOMAD for 27 years, MadCaf has appeared at: Cosmic Puffin Festival for 12 years, fed the 10-day Land for Life march in Switzerland 2007 and provided food for several private catering events e.g. Charity conferences, Weddings.  In recent years, Madras Café has won the People’s Choice Award for the best food at WOMAD three times. Each year, many regulars return for the taste of the best thalis and dosas the festival has to offer.

Profits from Madras Café go to Action Village India’s NGO partners to support their rural initiatives in redressing deprivation and social injustice.  There are strong links between Madras Café and the work of Action Village India’s NGO partners.  Every year at WOMAD, the MadCaf marquee hosts a themed exhibition of the partner’s work in Rural India.  Past themes have included: Girls Education, Food Sovereignty, Women’s Rights, Microfinance Enterprises, Human Rights and The Jan Satyagraha Land March 2012

In its campaigning, Madras Café aims to raise awareness of the particular importance of Food Sovereignty for the rural populations of India heavily dependent on Agriculture.  Here in the UK we, as consumers, by focussing attention on how and where to source our food, can prevent the degradation of the environment, reduce our carbon footprint and at the same time, enhance the lives and protect the livelihoods of food producers around the world. 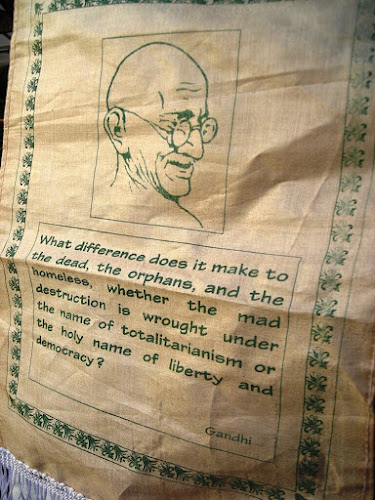 MadCaf’s philosophy is a mudpie masala of very imaginative, creative individual ideas, kneaded together by a time consuming egalitarian politics of democratic discussion – and sometimes less high-principled decisions occasioned by ‘market realities’.  The integral internationalism in MadCaf’s purpose, and the increasing number of foreign volunteers, complements the WOMAD spirit – to bring together the people and music from around the Globe.

We published the first Madras Café Cookbook in 2014 and we are publishing a second cookbook – full of new authentic Vegetarian and Vegan recipes – at Madras Café Unlocked on 24th July 2020.