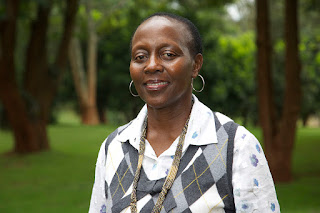 The UN Secretary-General has appointed Ms. Elizabeth Maruma Mrema of Tanzania as the Executive Secretary,  of the Secretariat of the Convention on Biological Diversity, based in Montreal, Canada.

”It is my great honour to assume the leadership of the UN Convention on Biological Diversity at this critical time for biodiversity, .My immediate priority is to ensure successful negotiations in developing a robust and ambitious post-2020 global biodiversity framework.” -- Elizabeth Maruma Mrema,

Since December 2019, Ms. Mrema has been the Acting Executive Secretary of the CBD Secretariat.

Prior to that, Ms. Mrema served as Director of the Law Division at the United Nations Environment  Programme (UNEP) in Nairobi, Kenya.

She has over two decades of experience at the United Nations, Ms. Mrema brings to the position extensive experience in global environmental law and policymaking, implementation of environmental and sustainable development programmes, and a deep knowledge of multilateral processes.

Before joining UNEP, Ms. Mrema worked with United Republic of Tanzania’s Ministry of Foreign Affairs and International Cooperation. During her time with the Ministry, she also lectured in Public International Law and Conference Diplomacy at Tanzania's Centre for Foreign Relations and Diplomacy.

Please join us in welcoming her in taking this position and wishing her much success.