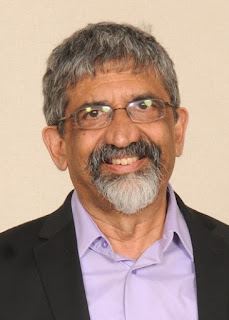 Vikram Rao, retired CTO concentrating on sustainable energy production and use, finishing his latest book Particulates Matter.
A webinar conducted by the Research Triangle Cleantech Cluster this week, in which I participated, triggered this piece. Some points made by the other three panelists Ivan Urlaub, Renee Peet and Gary Rackcliff are reflected here, but I take responsibility for this product.
For purposes of this discussion, energy falls largely into two buckets: electricity and oil and gas derivatives. In the last two months or so, the price of oil has halved.  Part of the driver was the Saudi/Russia spat, which is likely to end soon because neither can live with USD 23 (price at the writing) oil for long.  But the “shelter at home” policy in much of the world has slowed industrial output to a dull idle. Gasoline and jet fuel use has plummeted. Electricity usage has dropped.  Here we will discuss the likely longer-term implications, especially as relating to energy.  Some of the issues addressed arise from questions that were asked in the webinar mentioned above.  Here is a crack at a list of outcomes that I see as highly probable.  A modicum of support is also offered for the assertions.


One, somewhat off topic outcome is rise in public empathy, and possibly altruism. When behaviors such as these are entrenched for months, they are more likely to stick. This is good. The (positive) irony would be if the pandemic caused “a contagion of good example” to spread. From an entrepreneurial standpoint, innovations in enabling this trend could be effective.