Guest blog: Corona Virus, A greater risk to the world than to China

On December 31, 2019, the coronavirus (COVID-19) appeared in Wuhan, China. While this explains the speed of the stock market fall, it is not enough to explain why it resembles the experience of the 2008 - 2009 crisis. Even before the crisis, the global economic outlook for 2020 was even lower than that for 2019. The impact can be comprehended, understanding the importance of China in global value chains. China is the source of five branches of the world economy: pharmaceuticals, automotive, aeronautics, electronics, and telecommunications. The closure of China's factories and trade slows down the production of these five branches in the world./ 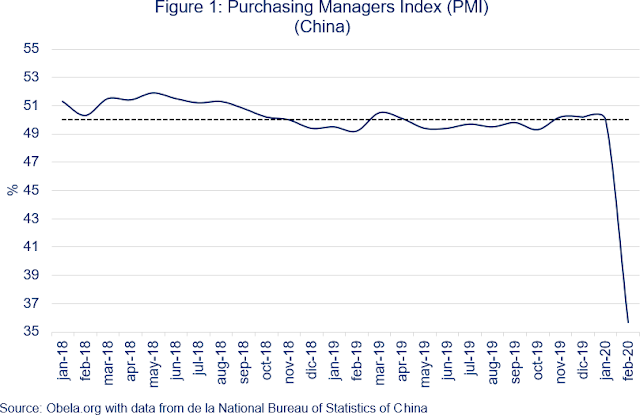 The impact is an immediate slowdown in world production until it grinds to a halt. The origin of this is the world order established in 1990 by the United States when the wall fell, and simultaneously China was integrated into world trade, creating the possibility of the law of one price. The other side is the bet on fossil energy, in a world that is moving towards clean energy. China  with clean energies is the axis of the new economic dynamic and the global technological vanguard versus the US that remains centered on dirty energy.

While China is beginning to have an impact on its manufacturing sector, the havoc the world is suffering is of increasing magnitude. In February 2020, the China Purchasing Managers Index (PMI) fell from 50 to 35.7%, as shown in Figure 1. The same is forecasted for the industrialized economies linked to China in the coming months, as there is a lagging impact, mainly due to existing inventories and to the ongoing burden. This lag will be one quarter at most. If China reopens, it will have lost a quarter of production; if China does not reopen soon, the loss could be as much as half of the production.

On the side of the countries exporting raw materials, there is a price decrease that has become more acute, and a fall in the volume exported, impacting on their economic growth even more. The drop in export revenues and the depreciation of all Latin American currencies express the effects of the virus-induced crisis. The fall in stock market indices precludes recessions in the region.

Indices such as the Baltic Exchange Dry Index (BEDI) and the Dow Jones Transportation Average (DJTA),  which measure cargo volumes, freight contracts and prices in maritime, rail, aerospace and land-based environments, show that there is already a drop in global trade that will soon be reflected in value chains. According to Bloomberg data, BEDI fell from a peak in mid-September 2019 to a low on February 10, which meant a drop of 84% in the index. The DJT fell from the year's high by about 36% to March 12, indicating a drop in trade within the United States. All these factors have affected the demand for oil. In addition, on 8th March Saudi Arabia announced that it would reduce its prices and increase production, which added to Russian production, caused crude oil prices to fall by 20% in March 2020. This impacts on the economies of the United States, Mexico, Colombia, Venezuela and Ecuador, with Venezuela being the hardest hit, followed by Ecuador and Colombia.

These declines have impacted 10-year bond yields in the US, Germany, and the UK, which are at record lows. There is a portfolio recomposition towards the dollar that has produced depreciations in all currencies, which will make imports more expensive and restrict the consumption of imported goods in the world. For the first time in history, the yield on 10-year US bonds fell below 1% due to the 0.5% cut in the federal funds rate by the Federal Reserve. The decision was taken at an extraordinary meeting, a situation not seen since the 2008 crisis.

The emergence of COVID-19 has accidentally exposed the underlying economic problems. The idea of global value chains designed to reduce costs has generated an uncalculated productive fragility whose effects are only now under study. The idea of global value chains, conceived from the reduction in costs angle, generated an uncalculated fragility of global production, the effects of which can only be studied in the future. What is certain is that uncertainty about the dynamics of the real economy has an impact on expectations in the world's stock markets and on economic growth. The result is a general depreciation of all currencies with an appreciation of the dollar, which will result in a contraction of world consumption in the years 2020 and 2021, at least. The revival of production, whenever it occurs, will be slower than the previous dynamics. The new decade will be one of energy transformation and new technologies.

The Latin American Economic Observatory (OBELA):
It is a research program in charge of gathering relevant information and analyzing in detail the situation and change in the economic reality of Latin American countries in the context of the world economy. OBELA develops its work from a Latin American perspective for the understanding and solution of the economic problems common to all countries, and maintains a constant dialogue with the academic sector, government agencies and civil society organizations.

The scope of the observatory is the 17 countries of continental Latin America plus four Caribbean countries; Cuba, Haiti, Jamaica and the Dominican Republic.

The organization of the work is through a general coordination, at the Institute of Economic Research of the National Autonomous University of Mexico, three subcoordinations:
OBELA's areas of interest are, in general terms: