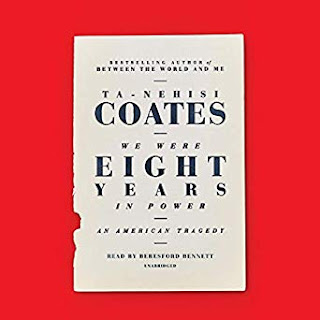 Summer is here and so I thought is share a few books that you might enjoy while on holiday.
Possibly the best political book I have read this year...when listening to on my trips is "we were eight years in power" by Ta-Nehisi Coates.  The amazon note says it better than I could:

"We were eight years in power" was the lament of Reconstruction-era black politicians as the American experiment in multiracial democracy ended with the return of white supremacist rule in the South. In this sweeping collection of new and selected essays, Ta-Nehisi Coates explores the tragic echoes of that history in our own time: the unprecedented election of a black president followed by a vicious backlash that fueled the election of the man Coates argues is America's "first white president".

But the story of these present-day eight years is not just about presidential politics. This book also examines the new voices,  das, and movements for justice that emerged over this period - and the effects of the persistent, haunting shadow of our nation's old and unreconciled history. Coates powerfully examines the events of the Obama era from his intimate and revealing perspective - the point of view of a young writer who begins the journey in an unemployment office in Harlem and ends it in the Oval Office, interviewing a president. 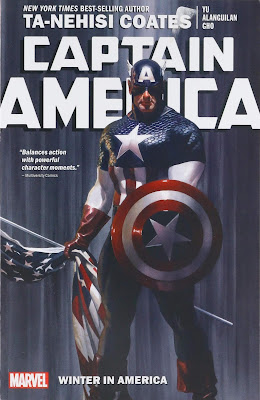 We Were Eight Years in Power features Coates' iconic essays first published in The Atlantic, including "Fear of a Black President", "The Case for Reparations", and "The Black Family in the Age of Mass Incarceration", along with eight fresh essays that revisit each year of the Obama administration through Coates' own experiences, observations, and intellectual development, capped by a bracingly original assessment of the election that fully illuminated the tragedy of the Obama era. We Were Eight Years in Power is a vital account of modern America from one of the definitive voices of this historic moment.

What I would add is that the book exposes the continued exploitation that the black community had even in the FDR New Deal..which basically excluded them from access to social security, GI bill education benefits and housing loans through the Home Owners Loan Corporation (HOLC). The HOLC created color-coded 'residential maps' based on what they deemed 'high risk' were colored red and they included EVERY single one of the 239 cities black neighborhoods. This meant that the black community could not access the loans and were at the mercy of loan sharks. It was called redlining.....It was only outlawed in 1968 by the Fair Housing Act but it still impacts on the communities today in valuation...Homes on black neighborhoods today are on average valued at $48,000 less than white neighborhoods with similar crime rats and amenities (Michael Harriot).

The book should be a must-read or listen to. Ta-Nehisi Coates is also an amazing writer and has taken up the writing of both the Black Panther and Captain America comics for Marvel.


Finally, the argument for reparations is made very well in the book and it shows Coates own journey to that position. The opening statement to the Hosue hearing on the subject is worth every white person time to watch ...as is reading the book. 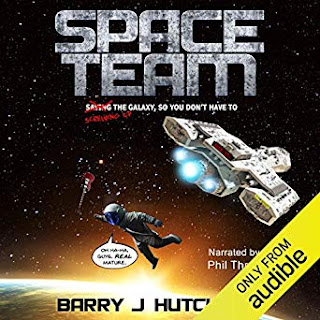 The Space Team series by Barry J. Hutchinson is for relaxing to. I would definitely get the audio - Phil Thorn captures the characters from this 12 book space opera amazingly. The first book promotion starts with:

Is he the new Terry Pratchett...As a huge fan of Terry's I would have to say the books are better than Terry's ...you laugh out loud and that is unusual for a book....By, I think, book 5 on the audio they are adding 'out-takes' from Phil who can't stop laughing while trying to read the characters....

"Laughed so hard I shot coffee out of my nose" Skyview

there is also an additional three private detective Dan Deadmen series...one of the tangential characters from The Space Team - to enjoy......this could be your whole summer taken care of :-)

I couldn't end a suggested book read without proposing one of my own ;-)  and that is my latest  Stakeholder Democracy: Represented Democracy in a Time of Fear. 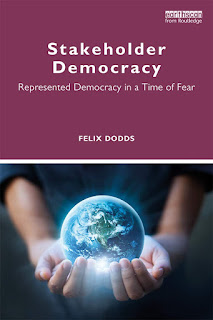 To let others comment on the book and why you should read it is perhaps the best way to promote it as a summer read:
"To mobilize action globally in line with the 2030 Agenda for Sustainable Development will require buy-in and commitments not just from governments, but from all segments of society. This book addresses a major component of that challenge – involving stakeholders in every part of the process to deliver on the promise of the SDGs. Many of the contributors have long led efforts to build an inclusive and democratic framework for delivering on sustainable development. Their experience, insights and analysis of what works and what doesn’t not only make the case for the benefits of multi-stakeholderism, but allows them to develop crucial practical and detailed guidance on making multi-stakeholder policy dialogues and partnerships legitimate, effective, and accountable." - Steven Bernstein, Professor of Political Science and Co-director of the Environmental Governance Lab, Munk School of Global Affairs and Public Policy, University of Toronto, Canada.

"This book is extremely timely. The ability for government institutions to deal with challenges to our society and planet is seemly getting worse day by the day. Government institutions need to be re-imagined and this book offers a vision that can help institutions to be more inclusive to society and respectful to nature by their design. The basic idea is to formally involve stakeholders in government decision making and therefore have society at large committed to implementation of policies, delivered through a sense of ownership and partnership. This vision can empower representative democracy in a time of fear of conflict and economic collapse to deal with social inequality and environmentally degradation" - Professor Patrick Paul Walsh, Director of the UCD Centre for Sustainable Development Studies, Senior Advisor UN Sustainable Development Solutions Network

Democracy is under threat and we need to work to stabilize it and this book argues what role Stakeholder Democracy might play. 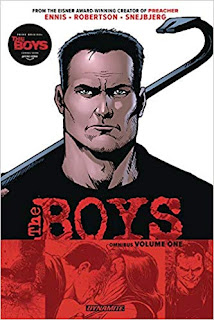 Finally, for those who know me, they will know that I love comics. Amazon have now their series 'The Boys' which people may not realize is a comic book adaptation from a comic by Garth Ennis (author) and Darick Robertson (artist) for the comic company Dynamite Entertainment.

The comic book is definitely worth a read before watching the amazon series but I have to say the series so far is very very good.

What would a world really be like with supers? would they be controlled by companies? Would supers really care about us? What happens when supers kill people?  What happens when they start to show mental illness.....forget about gun laws if your super can just kill you with their eyes...what do you do? You call the Boys.