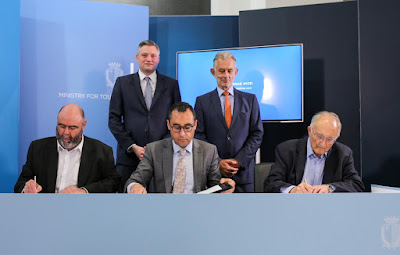 The Government of Malta, through the Ministry for Tourism, has just agreed with SUNx (Strong Universal Network) to take the lead in a global effort aimed at converting the threat of global climate change into an opportunity. The Global Centre for Climate Friendly Travel will launch a set of actions and opportunities to address this threat from the travel industry perspective.

Minister for Tourism Konrad Mizzi said that, "there is growing international consensus for a strong shift from talk to action. This is amply evidenced by the political action of the EU in raising the stakes these past few weeks by announcing the allocation of 1 in every 4 euro of the next budget to climate resilience.

This initiative will put Malta at the forefront of this change in creating more climate-friendly travel. We will become the home of SUNx – the Strong Universal Network – a global centre for Climate Friendly Travel following the targets of the Paris Agreement set in 2015."

In collaboration with SUNx, and co-founders of SUNx, Professor Geoffrey Lipman, Felix Dodds, and Dr Jinfeng Zhou. Malta will aim to deliver a number of initiatives designed to support the sector in its transformation. These include:

An Annual State of the Sector "Climate Friendly Travel" Review which will be published within the context of the United Nations General Assembly alongside the UN Secretary General's Climate Action Summit in September and will be circulated widely amongst industry players.
An annual Malta Think Tank and Climate Friendly Travel Summit.

A Plan for Our Kids to put 100,000 STRONG Climate Champions across all UN States by 2030.  This is a public/private collaboration to engage graduate trainees to help deliver transformation in the front line.

Professor Geoffrey Lipman said that, "the reality is that we have a Climate Crisis and that the scientists, the governments, and the next generation are demanding an increased ambition. Travel and Tourism is a pivotal part of human activity and has to be at the leading edge of change.

"Our collaboration with the Government of Malta will provide a new impetus through Climate Friendly Travel, Measured, Green, and 2050-proof: a pathway to the New Climate Economy and 100,000 STRONG Climate Champions by 2030 to help the transformation. This is carrying on the vision of Maurice Strong, the father of Sustainable Development, who believed that Travel and Tourism could be a catalyst for positive change."
felix dodds geoffrey lipman Konrad Mizzi maurice strong Tourism and climate SUNx