Environmental multilateralism at risk - where do we go from here? 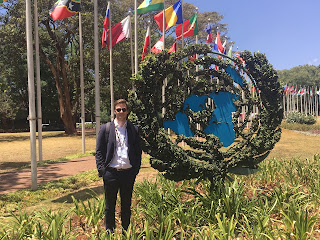 Johannes Müller, Ocean Policy Expert, OceanCare
Johannes is currently undertaking his doctoral studies at the University of St. Andrews and continues to support measures aimed at mitigating underwater noise and reducing the impact of plastic pollution at OceanCare.

As the world’s largest decision-making body on the Environment, the United Nations Environment Assembly (UNEA) is tasked with finding solutions to global environmental problems. From the 11th to 15th of March 2019 delegates, civil society representatives and other stakeholders came together in Nairobi to negotiate all outstanding resolutions, ranging from sustainable consumption to marine litter and microplastics, as well as single-use plastic. It is unfortunate that national agendas have hampered the adoption of progressive resolutions on an issue that is already recognised as a threat to the global environment. The prospect of a legally binding convention on plastic pollution was also pushed further into distance.

Over the course of the negotiations, it has increasingly become apparent that some core member states have yet to understand the seriousness of the problem of single-use plastics and the pollutive impact of plastic throughout its lifecycle, from extraction to production to consumption and disposal. Such countries have consistently stood in the way of a progressive deal to phase out single-use plastic. One can indeed speak of a tyranny of a few, begging the question of whether environmental multilateralism is at risk. There is certainly a case to be made for the UN’s unceasing aim of reaching a consensus. Only when consensus is reached is implementation likely to follow. Yet, UNEA 4 has made it abundantly evident that a few states- albeit led by a powerful nation- are capable of undermining progressive steps, even in light of the support by a majority.
Fabienne McLellan, Director of International Relations at OceanCare, usefully observed: “It was particularly difficult to hear from those countries most afflicted by plastic pollution, who have now left UNEA 4 with resolutions that change little in their daily plight against the menace.”
On Friday 15th of March we ended UNEA 4, sending an irritating signal to the private sector. The proponents of a resolution on plastic litter and a convention thereof have exemplified the spirit of compromise and good faith, willing to deviate from their original negotiation positions in an attempt to return to their capitals with a basis for future work. It was indeed a commendable effort by proponent parties, particularly the European Union, to find a common denominator.
The outcome of UNEA 4 is certainly not what we had in mind but the resolutions have built a basis for intersessional deliberations in the lead up to UNEA 5 in 2021. And our efforts to appeal to the international community to move towards a sustainable circular economy and away from single-use plastic will surely not end here.
Following UNEA 4 we attended the second substantive session of the Ad hoc open-ended working group addressing the Global Pact on the Environment, an instrument that seeks to address the fragmentation and lack of coherence of international environmental law.

Global Pact for the Environment- an interim and long term solution
For more than three decades the international community has sought multilateral answers to transboundary conservation concerns. A number of Agreements, most notably the Stockholm Declaration (1972), the Rio Declaration (1992) and the more recent Paris Agreement (2015), have recognized fundamental principles of environmental law. With the help of governments and courts, these principles have gradually been disseminated and implemented to some extent. Much to the regret of conservationists and jurists, international environmental law remains fragmented and is in urgent need of coherence. A Global Pact for the Environment, as put forward by group of 100 jurists from all over the world, is a possible solution. Perhaps even the best solution we have.
It is exactly this challenge that delegates and relevant stakeholders have addressed in their second substantive session in their deliberations that commenced on Monday 18th of March. Certainly, in the absence of strong resolutions on plastic pollution and the bleak prospects of a convention on plastics, the Global Pact for the Environment has become even more urgent and should remain on our radar.
As the second round of deliberations on a Global Pact of the Environment closes on March 20th we remain hopeful that momentum has been created. A number of countries have spoken out in favour of the urgent need to address the gaps in international environmental law, and some have noted the usefulness of a Global Pact.
The year 2022 will mark the 50th anniversary of the Stockholm Conference, marking the start of the work of the United Nations Environment Programme (UNEP) and the formalization of international cooperation on the environment. The adoption of a Global Pact, or any other instrument addressing the gaps in international environmental law for that matter, during the anniversary celebrations would certainly begin a fitting and new era of international cooperation.
Let us not get ahead of ourselves. With the third session of the Ad hoc open-ended working group coming up in May, OceanCare will continue its efforts in encouraging (and convincing) governments to close gaps in international environmental law, without endanger and undermining achievements already made.