While in New York in June I met up socially with some of the members of the House of Commons International Development Committee who were visiting to look at the issue of sexual exploitation and abuse in multilateral organizations within the aid sector as part of their research for their full report relating to the issue int he aid sector as whole. I strongly recommend reading the whole report which is a sobering and far too often shocking read.

I am republishing the section of the report that deals with primarily the UN. I have written before about concerns i have had in the development NGOs over a number of issues. What this report does do is challenge us all in the international arena to actually practice the values that we say we believe in. This report came out two weeks ago and perhaps will nto receive the review it deserves because it came out as many people were going on holiday. I hope this blog expands the group that will read both this section and then go onto read the whole report.

Safeguarding at the multilateral level

Role of the UN in tackling SEA
146. We have paid particular attention to the activities of the UN with regards to SEA. Since the 2002 West Africa report, which documented allegations of SEA that implicated 9 peacekeeping battalions and 40 aid organisations including UNHCR, the UN has continued to be subject to allegations: the UN Secretary-General’s Special Measures reports have shown that there were 165 allegations of SEA in 2016 and 138 allegations of SEA in 2017.
147. At the same time, the Secretary-General, António Guterres, is seeking to make strides forward in tackling SEA, having launched a “new approach” in his 2017 report on ‘Special measures for protection from sexual exploitation and abuse’, shortly after he assumed office. He aims to make the UN “a global example of best practice and leadership to be followed by all” in how it protects the people it serves from SEA, and has presented a raft of measures in support of this. In the 2018 Special Measures report, the Secretary General gives a renewed commitment to ensuring that PSEA remains a priority.
Influence of the UK at the UN
148. We heard that the UK is well placed to steer the UN towards progress. The Rt Hon Clare Short, former Secretary of State for DFID said, “[t]he UK is a big player in the UN system. Because it is a good funder, DFID has a lot of influence”. The current Secretary of State agreed, pointing out that the UK’s influence was strongest when coordinating with other donors: “the biggest lever we have… is other donors and our money”. We note that the UK will take the presidency of the UN Security Council in August this year, providing further opportunity to influence progress on PSEA.
149. DFID told us about some of the measures they have already taken to push the UN towards concrete improvements. In his oral evidence to the Committee, Matthew Rycroft CBE, Permanent Secretary of DFID, said that the UK had been helping to ensure that peacekeepers had SEA training:
the UK has doubled its contribution to UN peacekeeping in the last couple of years and we make sure that every single one of the British peacekeepers who go to join UN missions has proper training on how to prevent sexual exploitation and abuse. We also offer training to other contingents from other countries, who perhaps have less of a tradition in this area than we ourselves do, and we are working with the United Nations itself to make sure that one part of that family of organisations is able to spread that best practice to another part.
He also said that the UK is in a position to “withhold funding from any parts of the United Nations that do not match our requirements, either in terms of their reform or of their results”.
We have made absolutely clear that those parts of the international organisations that wish to continue to receive UK government funding need to make sure that they not only have zero tolerance for sexual exploitation abuse but that they can prove they have that zero tolerance.
150. In written evidence to the Committee, DFID outlined further actions at the multilateral level, including:
Establishing a donor working group to work together on PSEA “across the development and humanitarian sectors”;
hosting a roundtable in New York on 15 March with senior UN interlocutors and other donors;
Writing to the Secretary-General jointly with other donors calling on him to set out an action plan for a joined-up approach;
Writing to all multilateral agencies that DFID core funds, asking for assurances on their safeguarding practices.
Beyond the UN, the Secretary of State has co-hosted a roundtable with representatives from ten international financial institutions, who signed a joint statement reaffirming their commitment to preventing SEA.
Protection from Sexual Exploitation and Abuse (PSEA) 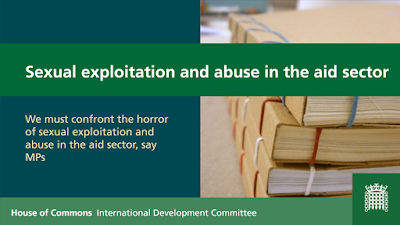 151. Through written evidence, the Committee has heard about a number of recent UN agency joint initiatives designed to tackle SEA. UNHCR, UNFPA, UN Women, UNICEF and UNDP, have jointly developed mandatory training on Prevention of Sexual Exploitation and Abuse for all personnel. UNICEF and UNFPA are co-leading a joint Task Force on SEA Allegations involving Implementing Partners, which focuses on developing a “uniform protocol” across the UN system for how SEA allegations involving implementing partners are reported and addressed. When we met with representatives of UN agencies in New York, they were keen to emphasise this collaborative approach.
152. However, despite these examples of joined-up working, we also saw evidence of a lack of coordination, and an emphasis on processes and procedures, without much apparent focus on outcomes. We were told that across the UN system there are now 18 task forces and steering committees working on PSEA. We were given this figure as evidence of how seriously the UN is taking PSEA, but this struck us as an indicator of a failure to integrate efforts. We also heard that it is a challenge to connect the work of IASC PSEA Task Force, which includes external organisations and NGOs, with the work of the UN working group on sexual exploitation and abuse, chaired by the Office of the Special Coordinator, as well as the difficulty in connecting these both up with the UN’s wider work on gender-based violence.
153. Our impression of disconnect was validated by the Secretary of State, who talked about the “inconsistency between agencies” with regards to reporting. She said that “[u]ltimately, this is about… not duplicating things, cutting down on bureaucracy and having something that is effective and efficient”.
I don’t think there is any quick way of getting the UN to get where we want it to be on these issues and others, other than the hard graft of getting it there. Part of the success of that is going to be donor nations who pay the agencies to do their work, to require them to do it in a much more joined up and co-ordinated way.
DFID told us in written evidence that the UK is supporting a joined up response across the UN, and has sought assurances from the Secretary-General that the UN is working collaboratively and collectively to step up efforts to tackle sexual exploitation and abuse. The Deputy Secretary-General, Amina Mohammed, welcomed a strong voice from Member States in this regard, when we met with her in New York. She highlighted the leverage that Member States have over UN funds and programmes through their funding and position on executive boards.
154. With only a limited pot of resources for PSEA initiatives, it is imperative that the UN agencies pool their efforts to maximise their impact. We recognise that there are now a number of joint initiatives but the sheer number of task forces and working groups that have sprung up indicates that there is still duplication, or at least a lack of integration, of efforts to tackle SEA. If there is work being done to systematically measure, monitor and evaluate the outcomes of these various measures, and share learning, we have not seen evidence of it. Member States have a key role to play in promoting closer working between the various limbs of the UN system and, importantly, in ensuring that outcomes are being monitored, evaluated and shared. We welcome DFID’s push for more collaborative working and we encourage the UK to leverage the donor working group and the position that Member States hold on UN agency executive boards to ensure that this comes to fruition.
Accountability
Lack of coherent and consistent investigation standards.
155. We have received evidence that has led us to question the standards of UN investigations into allegations of SEA. The Code Blue Campaign, using leaked documents on 14 UN fact-finding inquiries into complaints brought against peacekeepers serving in the UN mission in the Central African Republic (MINUSCA), concluded that the UN was operating with “haphazard, ad hoc, and prejudicial investigative procedures”, where the fact-finders had “scant understanding of crimes of sexual violence”.Caroline HuntMatthes, an independent investigator who has worked for eight UN organisations, said that during her service at the UN, she saw a need for better training for investigators.