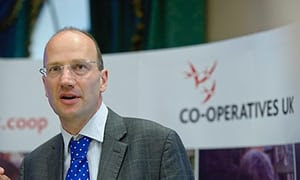 Guest blog: Ed Mayo is secretary general of Co-operatives UK, the national apex association for co-operative and mutual enterprise in the United Kingdom, and vice president of Cooperatives Europe, the European region of the International Co-operative Alliance.
“What You Can Do, or Dream You Can, Begin It”
John Anster, after Goethe
There is a vision for the world, set down by the United Nations (UN) in the form of a series of targets for the period running up to 2030. The 17 Sustainable Development Goals (SDGs) agreed by UN member states in September 2015 as part of the 2030 Agenda for Sustainable Development offer a powerful shared vision of development. They recognise the complexity of the challenge they represent. They are universal and they are integrated. Above all, taken together, they represent a fundamental shift from a model of development oriented around economic growth to one that aims to be both an environmentally sustainable and a socially equitable model. It can be argued that the SDGs reflect a people-centred model of development rooted in co-operative values and reflected in many cultures around the world, including Japanese concepts of the scope for harmonious co-existence between nature and humankind.i
The ambition of the SDGs can be understood by contrasting them with the previous global goals adopted by the UN – the Millennium Development Goals (MDGs). These galvanised action and harnessed focus and resources, but they were far more limited. The MDGs only applied to developing countries, while the SDGs apply to all countries. The MDGs only addressed development, while the SDGs address sustainable development. The MDGs only addressed specific sectors, whereas the SDGs address the cross-sectoral issues. The MDGs only focused really on the symptoms, whereas the SDGs address the actual causes.ii
The more ambitious the targets, of course, the less guarantee there is that targets that are set will become targets that are met, but the opportunity for the co-operative sector is significant. Here is a framework that visionary co-operatives have been working towards for a long time. In terms of affinity, the match between SDGs and co-operative values and principles is close. Further, what co-operatives bring is not just vision, but the ability to live out that vision in practical, commercial reality. As a recent report, from July 2017, by the UN secretary general says, “co-operative enterprises are in a unique position to help to promote the 2030 Agenda. They are natural vehicles to deliver the collaborative partnership and the people-centred and integrated approach required to attain the 17 Sustainable Development Goals.”iii
Co-operatives could be the business model for a sustainable world, if we now have the ambition to imagine how not just enterprises but whole economies could operate on a co-operative basis.
The co-operative foundation: action that is practical and visionary