Re-post from LSE:The mythical peril of divesting from fossil fuels 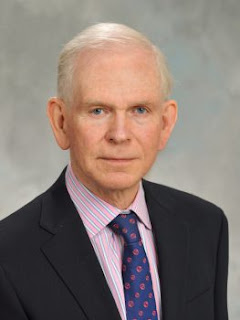 I have met more investment committees than I care to think about. Perhaps a couple of thousand. There is a no more conservative group on the planet than an investment committee. You could be forgiven for thinking that if you cough at an investment committee they will think they are ruined!
So if you tell them that you are going to interfere in any way, such as by removing a particular group of companies from their investment portfolio, an investment committee will likely warn that it will cause great harm to the long-term return. And the committee would definitely balk if you wanted to remove a major group like fossil fuel companies.
So my colleagues and I finally carried out a test to see exactly how an investment portfolio would have been affected by divesting from a group of companies that are listed in the Standard and Poor’s 500, the index based on the market capitalisations of 500 large companies listed on the New York Stock Exchange or NASDAQ.
These companies can be divided into 11 sectors (not including real estate). We considered the 10 long-term sectors (real estate was added relatively recently), and analysed how the index performed without each sector.
Initially, we considered the period from 1989 until 2017. The results are shown in Figure 1. You will see how dramatically the index changes with the removal of each sector – there is only a 50 basis points difference between the best and the worst. They are basically all the same! You will see that excluding the information technology sector made a small difference for a few years around the turn of the millennium. That was the technology bubble. Beyond the burst of the bubble, all of the indices track together again, as if nothing had ever happened.
But basically, all of those 10 variations of the index track between 1989 and 2017 as if they were the same. So we decided to see what happened if we chose a different period, incase there was something extraordinary about the past 28 years. We extended the analysis, first to start from 1957, and secondly to begin in 1925.

You will see in Figure 2 that changing the period of analysis does not make much difference. The difference between the best and worst is 54 basis points instead of 50. So over 90 years, it would not have cost an investor to have divested from any one of the sectors. 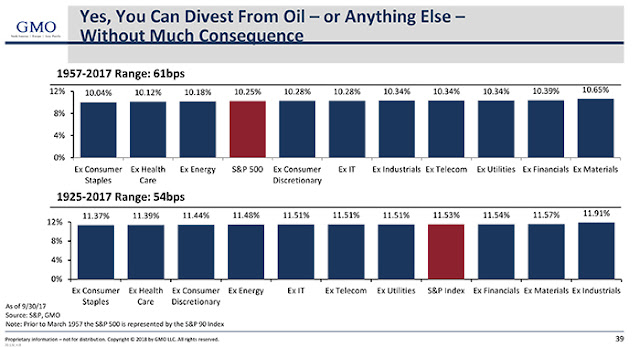 Who knew that the stock market was that efficient? It may be hopeless in bubbles and busts, but it has evidently priced these groups of big companies pretty well. And there is no advantage to an investor of choosing the high-growth information technology sector over, say, utilities. Utilities are priced down and information technology is priced up, but they produce the same returns. It is amazing.
What does this mean for divestment? It means that if investors take out fossil fuel companies from their portfolios, their starting assumption should not be that you have destroyed the value. Their starting assumption should be until proven otherwise. that it will have very little effect and is just as likely to be positive by 17 basis points as negative. That is an amazing contradiction to what every investment committee has ever said, as far as I am concerned.
It obviously takes a major miscalculation to move the dial when it comes to divestment. I think that decarbonization is just such an event. And the reason I think that is that the oil companies and the chemical companies are not rolling with the punches. They are fighting decarbonization tooth and nail. They are still funding obfuscation programmes in North America. And if you do that as a corporation, as a capitalist, you are likely to bite the dust if you are facing a major change, if you fight it. And they are fighting it. If they rolled with the punches, they might do quite well, and bleed off their capital and pay big dividends. But they are not doing that.
There is an argument that even if the oil companies eventually lose most of their gasoline market, they can at least fall back on their chemical feedstock business. I think this is very optimistic. Chemicals are making our world toxic to life in general, from insects to humans. This is an even more visceral topic than climate change, and I believe there will be even more lawsuits and general resistance to many chemicals in 10 and 20 years than there is to oil for energy. And this is a high hurdle, for oil companies have since the late 1970s provably known the serious harm that their products would cause.
Investors with long-term horizons should avoid oil and chemical stocks on investment grounds. They face a sustained headwind. In contrast, investing in companies that benefit from decarbonising the economy, although they come with no guarantee of success, do offer a sustained tailwind; their top-line revenues will certainly be growing faster than the rest of the economy. Ethical arguments for divestments are simply not necessary. They are a pure bonus.


This commentary is based on a lecture by Jeremy Grantham which was delivered in London on 11 April 2018 – a recording of the lecture can be accessed here.