No trade-off between economic growth and environmental protection
Responding to the challenges facing the global economy; ensuring enough financial means to fund the Sustainable Development Goals; exploring the digital economy and other frontier issues of sustainable development; and a moment of epiphany. The topics were many as cameras were rolling for the first UN DESA Voice interview with the UN’s Chief Economist Elliott Harris in a sun-drenched Rose Garden at UN Headquarters.
UN DESA’s new Assistant Secretary-General for Economic Development, Elliott Harris, is a veteran when it comes to the international economy and sustainable development. His extensive portfolio spanning 25 years, also reveals a focus on macroeconomic policies, which align well with the three pillars that make up the 2030 Agenda for Sustainable Development.
Since Mr. Harris took office on 2 April 2018, his schedule has been quite busy with many back-to-back events organized by UN DESA. One of these events featured the launch of the midyear update of one of the department’s flagship reports, the World Economic Situation and Prospects (WESP).

Economy is growing, but so are the risks

Given Mr. Harris’ position as the very first UN Chief Economist, our team took the opportunity to discuss some of the latest economic trends, the risks presented in the WESP and how to avoid them. “I think it’s less a question of avoiding these risks, than it is a question of recognizing them and dealing with them,” Mr. Harris said. “If we take the question of rising carbon dioxide emissions, we know that in part, that is due to the fact that the overall economy is doing better,” he explained. “It [the economy] is performing even more robustly than we had anticipated six months ago. It draws our attention to the fact that we need to spend more time decoupling economic growth from carbon emissions.”
When asked the rather provoking question, if it is possible to grow the economy without harming the environment, Mr. Harris responded swiftly and reassuringly: “Absolutely. We do have a lot of solutions that are potentially there that could be deployed through the right kind of investments,” he explained.
But it is not only the environment that we have to consider when the economy is growing, underlined Mr. Harris. We also have to ensure that the gains we make are distributed equally.
“The economic prosperity that we have managed to generate has not been evenly shared,” he said. “We have seen the widening of inequalities at the national level, within countries, and between countries. And clearly that is just as unsustainable as environmental degradation is.” 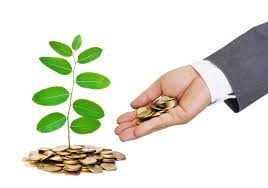 “I think there has been good progress, but its not enough. We see for example that the official development assistance has strengthened, but official development assistance is really small, by comparison to the requirements or the investments that we need,” said Mr. Harris. He explained that there is progress when it comes to strengthening domestic resource mobilization, as well as an acceptance among UN Member States that we need to collaborate on tax matters to avoid tax evasion and elicit financial flows, and instead direct these resources where they are needed.
“On the private side, and here I have to emphasize, it is private financing that will make or break the sustainable development agenda, we see very positive signs,” Mr. Harris said. “We see that on the one hand, the private financial industry is paying attention to the fact that unsustainable practices are also not good for their business.”
“We also see a lot of understanding that the sustainable development agenda presents a lot of very large, very profitable opportunities,” Mr. Harris said, noting that sustainable development is starting to become a part of business models. “It is exactly what we need to see happening!”
However, we’re not quite there yet, cautioned Mr. Harris. “It is still unfortunately possible to make profits doing things that are not sustainable. That has to change,” he said.

The next frontiers of sustainable development
UN DESA is leading the preparations for the High-level Political Forum on Sustainable Development in July, where our global efforts to achieve the SDGs will be evaluated.
“There is progress being made, but we need to step up the pace of that progress, and we need to try to make it as uniform as we can across the entire sustainable development agenda, because we can’t succeed if we only succeed in certain areas,” Mr. Harris said, commenting on these joint endeavors.
We also discussed the department’s research on the frontiers of sustainable development and on issues which has the potential to reshape our future.
Digitalization of the economy and solving the transportation challenge for an urbanized future were some of the issues that Mr. Harris anticipated for UN DESA to examine closer.

“Environmental protection must be part of any economic planning”
As our interview was about to wrap up, Mr. Harris shared his personal story of how his awareness and interest in the environment began back in the 1980s, as he was studying in Germany. At that time, there was a growing public concern about the prevalence of acid rain, decimating forest areas in the country.
Many years later, during the financial crisis in 2008-2009, when Mr. Harris was working for the International Monetary Fund (IMF), he joined an event hosted by the UN Environment Programme, which focused on the macroeconomic chapter of the green economy report. This led to a moment of epiphany.
“For the first time, it became clear to me how one could have economic prosperity without damaging the environment in the process,” Mr. Harris said, describing this moment as the one that sparked his professional interest in environmental work.
“It was that recognition that it’s not a trade-off between good economic performance and environmental protection,” he said. “Environmental protection can and must be part of any economic planning.”