Rogue CNN 13: Is it the End of Everything? Or is it just going to get worse? 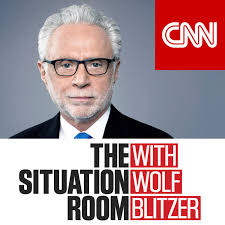 ((Rogue CNN exists in a parallel universe to ours where a corrupt property developer and reality TV star gets elected President of the United States))
Wolf: This past week or so we have been watching a series of disasters unfold – some natural, like the hurricanes, and some man-made, like the terrible shootings in Las Vegas. And a Republican party that is showing elements of challenging the President. Cabinet members allegedly calling the President a ‘moron’. Senators saying that Trump's advisers are all that separate us from chaos or World War III. Before going to the panel let’s go over to the hear from White House Press Secretary Michael Strauss.
Strauss: We all are sending our prayers and thoughts to the families of the victims of the hurricanes and more recently the shooting in Las Vegas. But obviously that isn't enough. You guys know my position on guns. This President hasn't agreed with it since he began running - when he did agree with it - but there are signs that this horrible incident in Las Vegas might just move the needle on gun control for the wider American public.
Rogue Fox: Are you not worried that this might trigger a roll-back of the second amendment? 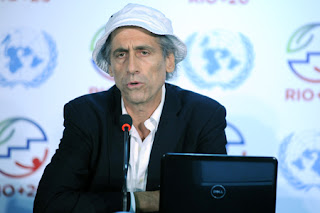 Strauss: That's a really unfortunate choice of words, Brit. I am pretty sure that allowing citizens to machine gun hundreds of other citizens in cold blood was not what the founding fathers had in mind when they drafted our Constitution. The NRA has managed for far too long to stop even a discussion on gun control.  There is clearly a majority in the House for passing some sensible background checks and now maybe even something on semi-automatic weapons. I'd say it is now up to Speaker Ryan to allow that vote.
Rogue CNN: There has been a lot of criticism of the President and the government over their response to Puerto Rico after Hurricane Maria left over 3.4 million without electricity and water.
Strauss: The President was as you know visiting Puerto Rico on Tuesday and I think you will find he will be making a personal commitment to the island in the coming months by announcing construction of another Trump resort and golf course. With all the devastation, Republicans think it has opened the opportunity to rebuild without too much regulation and the President wants to ensure he contributes to that.
Rogue Washington Post:  I guess that has nothing to do with his plans, but he already had owned a golf club on the island, and it went bankrupt costing the government millions of dollars it had contributed. Can he assure the Puerto Rican government that won't happen again?
Strauss: Actually, that's not entirely correct. Trump did not own that golf club, he simply had a management deal that made it look liked he owned it. His name was put on it and he was guaranteed a significant share of not just the profits but of all income, whether it succeeded or not. Some would say a classic Donald deal. As he will be the first to proudly inform you. The club may have failed but President made millions.
Rogue New York Times: Do you have any comment on whether the President is a ’moron’ or not?

(laughter from the press corps)
Strauss:  As I understand there are varying reports, some claiming he was called simply that by the Secretary of State, but others stating that he was called that with an obscene adjective in front. I think it is imperative that the press investigate and determine precisely what that adjective was before we can begin to decide whether it was valid. Or whether it was f--king valid.
(roars of laughter from the press)
I can say with confidence that the President is no more a ‘moron’ today than he was when the great American People in their unquestionable wisdom decided to vote him in as their President.
Rogue New York Times: A follow up. Will the President be sacking Secretary of State Tillerson? And what does the President think of the comment by Senator Corker that Gens. John Kelly and James Mattis, as well as Secretary of State Rex Tillerson are the "people that help separate our country from chaos"? This is surely stinging criticism of President Trump.
Strauss: At this point the President isn’t changing any more Cabinet members. He realizes how difficult it is to obtain people with the capabilities to serve at the Cabinet level. Individuals willing to accept endless tirades of abuse but still remain absolutely reliable if there should be a vote on the 25th Amendment. A rare combination. I'm sure we can return to this next week.
On the comments by Senator Corker, I have made similar comments myself to you guys that we have a solid group of Cabinet generals and CofS Kelly who should be able to ensure that the remaining months or years of this Presidency do not dissolve into “chaos”.
Rogue Mother Jones: Mike, you just said "months or years." Are you trying to tell us anything?
Strauss: No, I didn't.  I said months AND years. I couldn't possibly have said months OR years. That would mean I knew something or was desperately hoping it. Anyway, there's no way
I could have said it. It's prohibited by the NDA in my contract.
Rogue Guardian: It sounded pretty clear to us. Could you have the WH recording system play it back?

(Pause and scurrying as reporters all play back recordings from their phones.)
Rogue O Globo: Yup, you said 'OR'.
Strauss: Hmm. Must be some kind of massive internet disturbance. We'll refer it to our out-sourced tech experts - Kaspersky consulting - and they'll remotely revise the record on all your phones.
Wolf: We are back in the studio now with a panel of Anderson, David Gergen, Mary Katharine Ham and Dr Hunter Thompson. 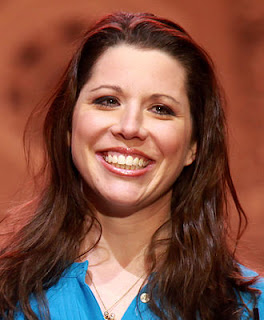 Anderson: The Trump response to Puerto Rico has been underwhelming compared to that for Florida and Texas. If I was the President I would be a little careful on this. If it looks like he might profit from the disaster by building a Trump holiday resort then I am not sure if even his supporters will react to that positively. But then again, we have thought that about so many things this President has done. That this crisis or that was going to implode this Presidency but we have seen time after time the dark under belly of the country.
Gergen: Anderson you are starting to sound like Hunter. None of us could have imagine in our darkest nightmares a Presidency like this. Strauss has called this right throughout, warning us what was happening and who was responsible. He said when CofS Kelly was appointed that we should be okay with the ‘generals now in place’. The inference was that they would protect the Republic from the President.  I am sure that Secretary Tillerson isn’t the first to have made colorful comments about this President.
Ham: I am interested to see if the comments by Governor Kasich, and now by Senator Corker and Senator McCain and others might be leading to some form of realignment within the Republican Party. I was struck be the Governor's comments to Jake Tapper this week when he said “If the party can't be fixed, Jake, then I'm not going to be able to support the party. Period. That's the end of it."  One way of taking a stand on this would be not to accept Roy Moore into the Republican Caucus if he is elected to the Senate. McCain has a real chance if he wants to leave a lasting impact on US politics to lead the sensible Republicans into a new party. Will he do that? I doubt it, but it is needed so that the fringe is isolated and there is real choice in US politics with one party advocating small, fiscally responsible government, and one that is socially liberal - but both that are science based and multilateral. I think that is where the vast majority of US citizens are.
Thompson: I'm afraid it ain't that easy. This country has been having a nationwide nervous breakdown since 9/11 and then the financial crisis which no one went to jail for. A nation of people suddenly broke, the market economy goes to shit, and they’re threatened on every side by an unknown, sinister enemy and now by anyone with a semi automatic. But I don’t think fear is a very effective way of dealing with things – of responding to reality. Fear is just another word for ignorance, hatred or loathing. You can't solve problems with it. Unfortunately however, you can run a dictatorship that way .
How close are we to that? As I might have once said, there is no honest way to define the edge... because the only people who really know where it is are the ones who have gone over. The American people have been here before with Nixon. They voted him in in 1972 as more trustworthy than George McGovern and more likely to end the Vietnam war. I thought then that we finally had come face to face with ourselves; finally, just lay back and say it — that we are really just a nation of 220 million used car salesmen with all the money we need to buy guns, and no qualms at all about killing anybody else in the world who tries to make us uncomfortable. I used to say it never got weird enough for me. I’m not sure I can say that anymore.
Wolf: Wow. And with that positive vision of our future we need to go to commercial break. Hopefully, we'll be back.