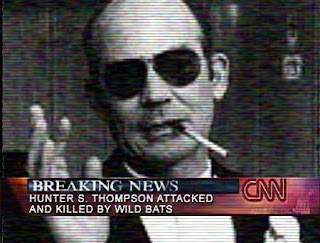 ((Rogue CNN exists in a parallel universe to ours where a property developer and reality TV star gets elected President))
Wolf:  In recognition of the political world that spins ever more deeply into an alternative reality, Welcome to a special alt reality edition of Rogue CNN.
I am reminded of the British band the Vapors and their single Turning Japanese. Are we seeing President Trump turning Democrat? We have a great panel here today to explore this.
Anderson, David Gergen, Mary Katharine Ham.  And I’d like to welcome the most alt reality guest of all, an icon in his own time (though that time actually ended 2 decades ago), the all-time gonzo journalist, the man who in many ways originated the merging of the political with the personal, the insight with the insult, the profound with the profane - former Rolling Stones Political Commentator and now a CNN Contributor, Dr. Hunter Thompson.
The panel are here to discuss - Is Trump turning Democrat? 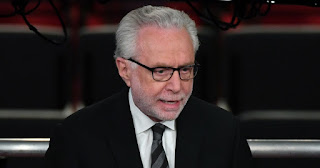 If I can turn to David Gergen first who has served as a presidential advisor for four Presidents - Nixon, Ford, Reagan and Bill Clinton.  What do you make of the deal or deals with Senate Minority Leader Chuck Schumer of N.Y., accompanied by House Minority Leader Nancy Pelosi of California?
Gergen: Well, Strauss has been signaling this is where the President was going for a number of months – it's just none of us believed him. I think Trump is fed up with the in-fighting and incompetence of the Republicans.  On a personal level, he gets on with Nancy and, in particular, Chuck. Much of Trump's reactions are based on how he feels with people. He never warmed to Reince Priebus, who he considered a little wimpish.
Chuck is a fellow New Yorker, and he knows him well – they talk the same language. They both know how to play the insult, blame and go for fame game.  How long this will last - who knows?
Ham: I think it will last as long as he feels good, and gets stuff done, and it shows in the polls.  It’s unclear how he will sell this to his base, but perhaps he can. They like him and he likes them, so maybe, in the end, it will not matter. He is getting positive press on the main media and even on Fox so he is a happy bunny.
Anderson: I was interested to see the reaction of the conservative media.  Breitbart went for ‘The DON’ and Ann Coulter was incensed – which was wonderful to watch.  She said:
"At this point, who DOESN'T want Trump impeached?"
I have to say this doesn’t bode well if Mueller finds anything on THE DON.
Thompson: It’s great to be here in this alternate reality and to be talking about THE DON.  A great name for him because this is where he is going to come apart.  He is, after all, Putin’s poodle. Politics used to attract the best and the brightest now it attracts the dumbest and meanest. Trump has sold his soul for towers with his name on it that looks like a xxxxx. (CNN very loud and extended bleep)
Wolf:   Wow. The loudest bleeps in any show I've anchored. 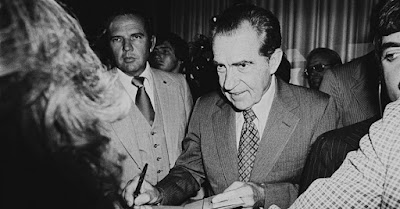 Thompson: What was it that Mario said of him? Oh yes ‘small hands”….. if Nixon represented that dark, venal and incurably violent side of the American character then Trump represents the used car salesman with all the money and he doesn’t care who he kills.  I would like to see them both in an ultimate fighting ring…my money would be on Nixon pulverizing Trump into the floor within minutes.
Nixon was THE evil bastard. He had the fighting instincts of a badger trapped by hounds. The badger will roll over on its back and emit a smell of death, which confuses the dogs and lures them in for the traditional ripping and tearing action. But it is usually the badger who does the ripping and tearing. It is a beast that fights best on its back: rolling under the throat of the enemy and seizing it by the head with all four claws.
That was Nixon's style -- and if you forgot, he would kill you as a lesson to the others. Badgers don't fight fair, bubba. That's why God made dachshunds.
As I have said before in a nation run by swine, all pigs are upward-mobile and the rest of us are fucked until we can put our acts together: not necessarily to win, but mainly to keep from losing completely.
May: It certainly is colorful having you on the panel Hunter but back to the President and the Democrats. The President has always been keen to find a term to define his opponent ‘crooked Hilary’ or ‘Lying Ted Cruz’ or ‘Low Energy Jeb’ or ‘Little Mario’. I hear that he thinks of the Republican leadership as ‘low energy’ so don’t be surprised to hear this term being used by Strauss.
Thompson: We bought the ticket and now we have to survive the ride. Life has become immeasurably better since I have been forced to stop taking it so seriously. Jesus Christ man!! If there is one thing I am afraid of its those damned rabbit/bunny men from space. Kill the little bastards!!! (Thompson is swatting around his head as if there are flying rabbits or bats attacking him)
Wolf: Hunter are you ok? We now have a clip from Strauss’s press conference this morning I want to play for you Hunter. 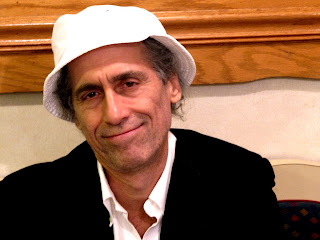 Strauss: As you guys can see the President is on a roll. First the debt, now the dreamers, next will be tax relief and infrastructure. Who knows maybe we will even see a deal on universal health care and golf courses.
Rogue CNN: Do you give the credit to the new Chief of Staff for this turnaround?
Strauss: Well, it certainly helps to get rid of the Mooch and the Grim Reaper - not to mention the whippet, sorry, Priebus. The generals have always been center types, except for Flynn who is looking more and more like he’s going to be experiencing one of our government institutions or I hope one of the private ones for a very long time.
Rogue Washington Times: I am sure I saw Bill Clinton in the White House after Chuck and Nancy had left. What was Bill doing here?
Strauss: I cannot confirm or deny that Bill was here in the White House or that he actually has taken over basement level 1 with Dick Morris.
Rogue New York Times:  Is Bill advising Trump?  It’s starting to look awfully similar to Bill's triangulation policy of the 1990s.  That strategy worked for him and involved adopting some of the ideas of one's political opponent. The logic behind it is that it both takes credit for the opponent's ideas, and insulates the triangulator from attacks on that particular issue. Do you think the Republicans will stand for it?
Strauss: That’s an interesting question.  I would just have to say that if this President were to adopt a triangulation policy, then who would blame him?  Those low energy Republicans have been driving him crazy.
Wolf: We are back in the studio now.  Hunter, why are you crying? 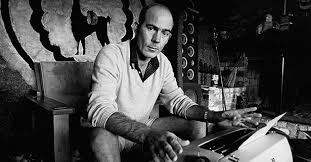 Hunter: I’m so proud of Strauss – he was my best intern ever!!! The stories I could tell you of him in Florida would make your hair go on end. Maybe after the show and the drugs you promised me for appearing.
Anderson: (cough cough.)  We didn’t ever promise you drugs. Children drugs are bad for you. Hunter have you just set Wolf’s chair on fire?????

Wolf: WE NEED TO GO TO A COMMERCIAL BREAK NOW!!!! 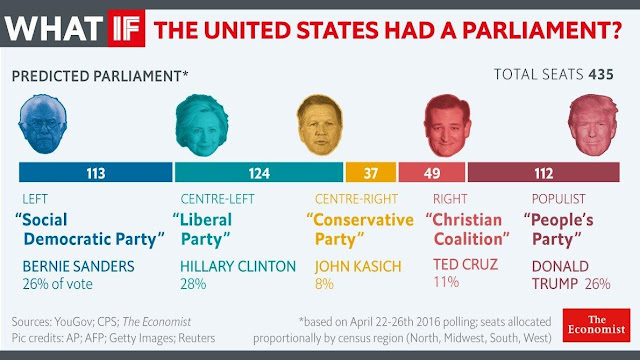