Video of the book launch of Negotiating the Sustainable Development Goals 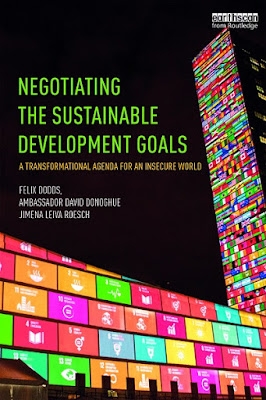 Book launch of  Negotiating the Sustainable Development Goals: A transformational agenda for an insecure world by Felix Dodds, Ambassador David Donoghue and Jimena Leiva Roesch at the UN Bookshop in New York was live streamed hon Friday 14th July . the video is available to watch below.
The Sustainable Development Goals (SDGs) are a universal set of seventeen goals and 169 targets, with accompanying indicators, which were agreed by UN member states to frame their policy agendas for the fifteen-year period from 2015 to 2030. Written by three authors who have been engaged in the development of the SDGs from the beginning, this book offers an insider view of the process and a unique entry into what will be seen as one of the most significant negotiations and global policy agendas of the twenty-first century. 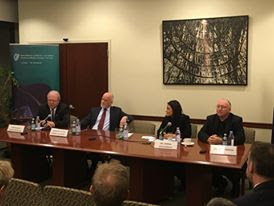 "Having participated in various negotiations on sustainable development since 1992, this overview of the process leading to the ambitious and important Sustainable Development Goals allows us to see the big picture and helps make the journey ahead possible."

"As the most prolific writer on issues of sustainable development and the multilateral system, Felix Dodds has done it again; on this occasion, working with Ambassador David Donoghue and Jimena Lieva Roesch. These three authors have brought their individual and collective knowledge and expertise to review the 2030 development agenda, consolidated in a recently articulated set of Sustainable Development Goals (SDGs). Offered by people who were immersed in the process, theirs is a necessary and timely analysis of how the multilateral system works, the consultations and negotiations out of which the SDGs evolved and their intended objectives.

Given their backgrounds and proximity to what took place, the authors have brought to their subject the quality of information and analysis likely to be useful to those who will be engaged in fulfilling this agenda within the multilateral system and its myriad stakeholders. When compared with the MDGs, the very large number of sustainable development goals and targets suggest very high ambition and an enormous undertaking at both the national and international levels. For students of development and international relations this will be an essential book. It will become a useful tool for peer review of the attainment of the SDGs. Coming so soon after consensus on the SDGs and the new development agenda were reached, the authors engage in an important discussion on which future books on this area will draw and be assessed.

All three authors are to be congratulated for this important piece of work."

"Experienced journalists covering UN negotiating meetings on sustainable development issues tend to make a bee-line for Felix Dodds to discover what is going on. Now he, and his equally well-informed co-authors – Ambassador David Donoghue and Jimena Leiva Roesch – are doing everyone a service by extending the privilege through this book, which traces the often tortuous process that led to the agreement last September of the Sustainable Development Goals.

Though AS OF YET little-known outside the international environment and development community, the Goals are – as the authors write – ‘a blueprint for the development of humanity and the planet in the 21st century’. Their adoption marks the moment when a decades-old argument was finally won.

This book charts how that happened and suggests how the victory should be followed up with action. "

"Negotiating the Sustainable Development Goals is an important and timely contribution to global development policymaking that will further our understanding of how the SDGs became the new overarching framework for a comprehensive development agenda – and help inspire and guide their implementation."