The single made number 1 within 48 hours and can be bought on iTunes or Amazon.

People who died in an inferno because of the policies of austerity and long-term government failure.

"Until 1986 all buildings in London fell under the London Building Acts which ensured that external walls must have at least one hour of fire resistance to prevent flames from spreading between flats or entering inside.

But under Margaret Thatcher’s government, those rules were replaced by the National Buildings Regulations and the crucial time stipulation was scrapped." Daily Telegraph

MPs from All-Party Parliamentary Group Fire Safety & Rescue Group also said that MPs had been calling for sprinklers to be fitted on the outside of tall buildings for years, but said their calls been ignored.

"Currently, sprinklers only need to be fitted up to 30 metres, but in tall buildings like Grenfell it is impossible for fire hoses to reach the upper heights, leaving the top floors without any protection." Daily Telegraph 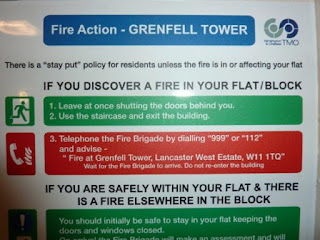