The United Nations is starting to take shape with the new team which will work with Secretary General António Guterres. The next decision will be who will be the Executive Director of UNESCO as Irina Bokova completed her second term. She has by all accounts done a good job as Executive Director having during her term had to deal with the withdrawal of US funding. She managed to do this without too much disruption to the work of UNESCO. She may find herself on speed dial to the new UN chiefs as they deal with what she has already had to deal with.
The Director-General of UNESCO is the Organization’s Chief Administrative Officer. The Director-General may be appointed initially for a period of four years, and may be appointed for a further term of four years, but shall not be eligible for reappointment for a subsequent term. Nine candidates have gone through the interview process.
Mr Polad BÜLBÜLOGLU (Azerbaijan)
Mr PHAM Sanh Chau (Viet Nam)
Ms Moushira KHATTAB (Egypt)
Mr Hamad bin Abdulaziz AL-KAWARI (Qatar)
Mr Qian TANG (China)
Mr Juan Alfonso FUENTES SORIA (Guatemala)
Mr Saleh AL-HASNAWI (Iraq)
Ms Vera EL-KHOURY LACOEUILHE Lebanon
Ms Audrey AZOULAY  (France)

Their bios and vision statements can be found here.

According to "a keen observer of the UNESCO race": 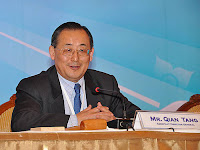 The odds-on favorite is insider Qian Tang (China), currently Assistant Director-General for Education. Not so much because he is a good candidate but because China will weigh heavily on this election and is likely to win fairly easily a majority of the votes needed in the Executive Board. To be fair, he is also credited with a convincing interview in  front of all 58 members of the Board; 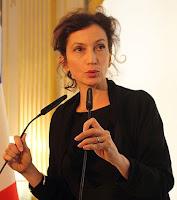 In second place comes Audrey Azoulay, Minister of Culture of France until very recently and who is also credited with a solid performance during the interview process. The Host country nevertheless surprised even its closest friends with this last minute and unwelcome candidacy.

Third in the eyes of most is Ambassador Moushira Mahmoud Khattab, from Egypt, who performed much better than expected in the interview process and has an outside chance of winning. She is supported in principle by fellow Africans, who carry a significant share of the votes;
Qatari candidate Al Kuwairi, the early favorite, did very poorly in the interviews. He should be considered a distant fourth;

All other candidates at this point stand very little or no chance.
The process forward is that the person to be nominated by the Executive Board shall be chosen by secret ballot, during a vote that will take place during the Board's 202nd session in October 2017. Subsequently, the Chairperson of the Board shall inform the General Conference, during its 39th session in November 2017, of the candidate nominated by the Board. The General Conference shall consider this nomination and then elect, by secret ballot, the person proposed by the Executive Board.