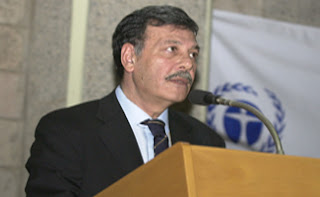 Q: What are the major water-related challenges of Pakistan?
A: Clearly the drastic decline in the per capita availability of fresh water in Pakistan, from 5300 cubic meters in 1951 to less than 1000CM at present, which places it in the category of water scarce countries must be regarded as our biggest water challenge. The drivers of this steep decline are explosive population growth and unregulated urbanization, economic development, which has led to an increase in the number of wasteful consumers of water, decaying water infrastructure, profligate use of water for irrigation, policy and governance deficits, including low water pricing and poor coordination among water-related institutions at both the federal and provincial levels.
The inordinate delay in the finalization of a water policy, despite the preparation of a well prepared draft, highlights the inexplicable indifference of our political system to the existential threats related to water resources.
A unique feature of our water resource situation is the excess versus deficit syndrome, which is due to seasonal variability - 80% of our water supply from the monsoon rains comes during the four summer months, creating an unmanageable surfeit, whilst there is a serious shortfall during the rest of the year. Our extremely meager storage capacity estimated at 14 million acre feet( MAF) means we can barely meet our fresh water contingencies for 30 days!
Inter-provincial disparities in availability of and access to water are another somewhat unique feature of our water woes. There is adequate supply of water in KP from rivers and lakes, but it is not available to large areas of the province due to geophysical constraints and insufficient infrastructure. The water challenges of Sindh result from its position as a lower riparian in the Indus Basin and its large desert and semi-desert areas. Baluchistan is also predominantly arid, receives insufficient rainfall, has limited access to the Indus Basin, and  its water infrastructure projects have been plagued by corruption and mismanagement.
The most serious water-related challenge of Pakistan is the poor quality of water. According to a recent study entitled “Provision of Safe Drinking Water”, prepared by the Pakistan Council of Research in Water Resources (PCRWR), 84% of the country's population does not have access to safe drinking water. 72% of the water supply schemes are dysfunctional and 84% of water supplied to citizens is unfit for consumption. All the 15 lakes in the Punjab province are heavily polluted. Water-borne diseases are endemic in both urban and rural areas. Half of all hospital beds in Pakistan are  reportedly occupied by people afflicted by diseases linked to poor quality of water. The deterioration of the quality of drinking water in rural areas is largely due to excessive use of chemical fertilizers and excessive abstraction of groundwater. Unless remedial measures are adopted on urgent basis, a catastrophic health crisis cannot be avoided.
Q: What are the main reasons for surface water losses, ground water depletion and poor aquifer storage and recovery?
A:  According to Pakistan’s water resource experts, out of the 104 MAF of river flows diverted for canal irrigation, about 44.25 MAF is lost in conveyance and only 59.75 MAF reaches the farm head. Another 15.0 MAF is lost in field application leaving 44.75 MAF for the crops. The shortage of water is made good by our farming community through excessive abstraction of ground water enabled by a million or more tube wells, for which electricity is available at heavily subsidized flat rates. The amount of ground water withdrawn from the aquifers is estimated at 50 MAF. Transmission losses from siltation in the canals and channels can be reduced by lining and adoption of water saving irrigation techniques.
The huge withdrawals of ground water which threaten the sustainability of the aquifers, as well as the quality of water, have been encouraged by the absence of any regulatory system for groundwater management. Efforts must be made to ensure the sustainability of groundwater in Pakistan.

Q: Surface water pricing has not been revised since 1972. Do you think that water pricing needs to be increased for domestic use and how much does low irrigation tariff contribute to ground water misuse?
A:  Rates of Irrigation charges (Abiyana) are extremely low and do not even cover the salaries of the employees of the provincial irrigation departments. The virtually free of cost availability of water certainly incentivizes wastage and must stop. There is indeed a strong case for raising the water charges.
Q: It is estimated that Pakistan has incurred $16 billion in economic losses since 2010 due to floods. What kind of sector reform and policy planning is required to “climate proof” the Indus Basin?
A: According to a 2013 study commissioned by the Asian Development Bank, Pakistan experienced 21 floods between 1950 and 2010, causing  economic losses estimated at USD19 billion (in 2010 dollars). The 2010 super flood alone resulted in losses calculated at USD 9 billion. Climate change is feared to trigger  more frequent, longer lasting, and more intense floods with devastating socio-economic and humanitarian consequences.
US geographer Gilbert White once stated: “Floods are acts of God, but flood losses are acts of man”. Given the enormity of the subject of flood prevention and management, I would only stress the need for a deliberate shift from our traditional flood management approach based on mitigating the losses from floods to  the comprehensive integrated water resource management (IWRM) paradigm in order to integrate flood warning with infrastructural improvements to reduce the adverse effects of floods.
Q: How can we control fresh water wastage in relevant riverine areas?
A: Fresh water losses can be reduced considerably, if not eliminated, by enhanced protection of watershed, especially through protection of forests and wetlands coupled with upgraded and well-maintained water  infrastructure.
Q: What are the main causes of surface and ground water contamination and how can these be addressed?
A: The exponentially increasing use of chemical fertilizers in Pakistan, due to intensive farming and poor quality of our soil and the dumping of all kinds of waste in the rivers and lakes and other watercourses, are among the major causes of surface and ground water contamination.
Q: Public debate on water is largely ill-informed. Is lack of reliable water data a major cause and how can we make water discourse inclusive and well-informed?
A: Lack of reliable and regularly updated data in Pakistan impedes the formulation and implementation of policies and action plans on all issues, including water resource management. In addition to impeccable data and objective analysis, a functioning regulatory system, and the active involvement of stakeholders is a prerequisite of an inclusive and informed discourse.
Q: There is no institutional role of women at the community or policy making level on water management. How does this affect water consumption patterns and management practices?
A: Women are invariably at the receiving end of all policy making and management processes, making the gender mainstreaming a key issue. This is especially relevant in the case of water consumption decision making.
Q: How much does the absence of a uniform method of measuring river flows contribute to misinformation in the public debate and policy engagement on water issues?
A: I understand that the only institution in Pakistan that has telemetry apparatus for gauging river flows is the Water and Power Development Authority. I am not sure whether WAPDA’s telemetry findings are in the public domain. Water flows data can help in preventing misinformation on water issues. 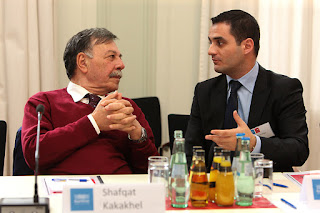