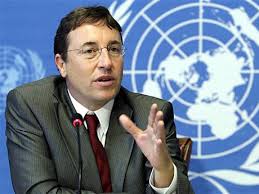 Achim Steiner will be the new Administrator of UNDP.

In an interesting move UN Secretary General António Guterres has picked former Executive Director of UNEP as the new head of UNDP. He will take over from Helen Clark in the summer and will be facing some challenging financial issues as the funding for UNDP has halved during Helen's term of Office. The organization has also seemed to lack any vision of what it is there for.

Steiner saw funding for UNEP increase during his term of office and he oversaw the implementation of the Rio+20 commitment to create a biannual United Nations Environment Assembly which has all member states as members.

Ina press report there was some unhappiness that the position had not gone to a woman. One of the candidates that did not succeed was  French Environment Minister Segolene Royal, she was surprised at the decision because Guterres had promised a woman would take the job.

"I regret it, of course. That doesn't gel with what was said, but c'est la vie," Royal told French television.

Clearly one of the first things Achim will have to deal with is another potential reduction in the UNDP budget this time due to the USA. The Trump Administration has indicated that they will cut the UN budget its just not yet clear which Agencies and Programmes will be most affected.Germany is as a major UNDP donor so it must be assumed that they will pick up some of the reduction in funding.

As i said in a previous blog - perhaps the vision of UNDP should be around the theme of 'leave no one behind' applied through all the SDGs.