Will the UN survive a Trump Presidency?

So one of the major challenges for the new UN Secretary General will be the relationship he manages to achieve with the Trump administration.

We have already heard from South Carolina Senator Lindsey Graham North Carolina before Christmas that unless the UN reverses its Security Council resolution condemning the Israeli settlements the US should refund the UN.

Let's just take a moment and think about this. This was the act of the UN Security Council a member led body not the UN as such but 15 member states, Below is the list of the countries all but one voted for United Nations Security Council Resolution 2334. The only that did not was the US who abstained.


The resolution was drawn up by Egypt - one of the strongest US allies in the region and with the help if British legal and diplomatic figures working together.

The resolution itself says that the UN Security will not recognise any changes to the 4 June 1967 lines including in regard to Jerusalem. It reminded member states to distinguish between the territory of Israel and the territories occupied since 1967.  So what did the member states who voted for this say. (this is taken from Wikipedia)

This was the response of the President-elect. I don't understand the criticism of the UN.... This was member state led by in many cases countries that are strong supports of the US.

This has today been followed up by conservative Congressman Walter Jones he and four others have co-sponsor a congressional bill that would remove the United States from the United Nations, and evict the "scandal-plagued" global body from the country.

In a period of increasing insecurity, the UN is needed more than ever not less.

These Senators and Congressman should perhaps consider what would happen without the UN being there.

Only last year the UN had to deal with the ebola virus - who would do the work without the UN?

What about conflicts? The UN has 16 current peacekeeping deployments. This includes Cyprus which goes back to 1964. A peacekeeping mission that at alst may be coming to an end soon.

What about disasters the last saw 750,000 people who needed assistance in Haiti and Cuba after Hurricane Matthew. Who would have dealt with the humanitarian crisis without UNICEF, World Food Programme, and other UN agencies?

What about issues like child labour? Who would do the work of the International Labour Organisation's work to stop child labour. W

Who would have come in and run the elections in Cambodia and Iraqi if the UN hadn't been there?

What about the AIDS epidemic. Who would have addressed it without the UN? Or infant and mother mortality without UNFPA or UNAIDS and WHO?

Who would have addressed the hole in the ozone layer? or climate change? or the loss of biodiversity? or the trade in endangered species?

What about war crimes. Who would have undertaken the prosecutions of Charles Taylor and Slobodan Milosevic the Liberian and Serbian leaders for war crimes?

What about preventing the proliferation of nuclear weapons. Without the UN how would that have happened? Who would have taken the role of the UN International Atomic Energy Agency in ending nuclear weapon research in some countries and submitting to inspection. 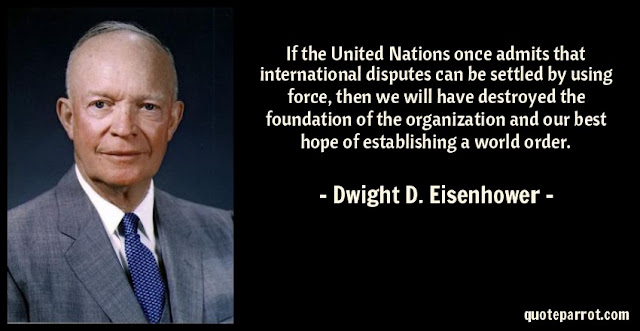 That's not to say the UN hasn't had failures for me the Rwanda Genocide, the rape and child sex abuse in the Congo are two examples of this.

There are so many more examples of success that I could give of the work of the UN and its amazing staff.

That an incoming President is yet unaware of some of this or doesn't hold it to be important to the stability and health of the planet should be of concern to all of us. I can only hope that changes after he takes office and he may want to consider Churchill's comments.