New comic book from Comics Uniting Nations and founding partner UNICEF
takes the action to the North Pole, and brings the message home to kids 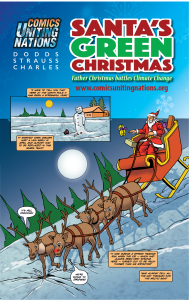 Actually, a rather old hero.

Santa Claus [also known as Father Christmas, Père Noël and St. Nicholas] today released a deeply personal account of his struggle to recognize, understand and take action against the impacts of rising temperatures and extreme weather events that are threatening the very foundations of his fabled workshop and village.

“Fortunately, she was soon on the mend,” Claus recounts. “But the whole thin-ice issue really caught my attention.”

Santa then read the studies by the world's most eminent scientists - and consulted with neighboring terns, wrens and polar bears - to confirm the gravity of the phenomenon.

“It seems to me we have been dashing to disaster,” Mr. Claus concluded.

But he also finds reason to hope, realizing that by leveraging clean energy sources and working together on the root causes of climate change, we can halt its destructive path.

The comic is freely available to the public in web and print versions. English is currently available, and French and Spanish will be released before Christmas.

Santa's Green Christmas is the newest release from Comics Uniting Nations: a partnership between UNICEF, The World’s Largest Lesson, PCI Media Impact and Reading With Pictures. The partnership is releasing a series of comic books with the ultimate mission to publicize and popularize the UN Sustainable Development Goals (SDGs).

Santa's Green Christmas was idea of Felix Dodds, a UN consultant and the co-author or editor of a dozen texts on sustainable development policy, and Michael Strauss, an international political and media advisor and the director of Earth Media.

Lettering is by Ian Sharman, an artist, writer and editor whose credits include Spider-Man, Iron Man, the X-Men, and Doctor Who graphic novels.  He is editor in chief of Markosia, and runs Orang Utan Comics, a comic book collective. Inks are by Lee Townsend, an artist and animator who has worked on Spider-Man, Avengers, X-Men, Iron Man and the Hulk, for Marvel, Disney, DreamWorks, and most recently the Cartoon Network.