5th Straw poll for the next UN Secretary General 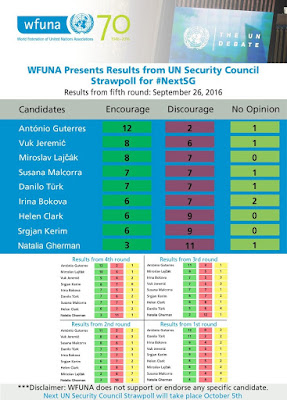 We are down to nine candidates with Christiana Figueres withdrawal. As you can see from the votes above Antonio Guterres remains the favorite for the new Secretary General. As you will have seen from my previous blogs on the subject though I think he has an excellent cv for the job he isn’t a woman nor one from the Eastern UN region -- whose turn it is.

Although this rotation between regions has been an informal agreement it makes sense that the different regions of the world should have a turn to be UN Secretary General. It fits in with the universal nature of the organization and ensures different cultural interpretations of the job. If you have regional rotation, then the Western Europe and Other Group region have their turn next (Antonio Guterres is from a WEOG country) as the Secretary General after this.

The backdrop to this  fifth straw poll is there is another candidate being promoted by some of the western European countries and that is Kristalina Georgieva the European Commissioner for Budget and Human Resources. There is no question she is qualified for the position but may be seen as too close to the EU for the Russian and Chinese P5 countries.

Against this backdrop are the news that the US, France and the UK have according to the BBC"

“openly accused Russia of lying about its involvement in the assault on Aleppo at an emergency session of the UN Security Council.”

In response Russia have criticized the US and the UK for using “unacceptable” tone and comments in speeches on Syria in the Security Council which according on the media included calling Russia being accused of “barbarism”.

I wonder what the impacts of this will be on the election of a new UN Secretary General? I could imagine positions hardening.

Looking at the standings after the 5th straw poll look for a number of things that will probably happen:

I'm not sure if that is true. If you spend enough time in a UN cafe you hear  all the rumors. Personally I think she has done a great job in UNESCO considering that she has had to manage without US funding.

So what would I expect Antonio (Portugal) not from Eastern Europe so the question is are either of the two discourage and 1 no opinion Russia or China? If so, then we could expect a veto. For Vuk (Serbia) are France, UK and USA one of the six discourage and one no opinion? If so expect a veto. For Miroslav (Slovakia) are any of the P5 in the seven discourage? I am not sure he will be vetoed he looks like a compromise candidate to me.  Coming back into contention is Danilo Turk from Slovenia he originally started very well on the 1st straw poll with 11 encourage but fell back but seems to have solidified with seven encourage unfortunately his discourage went up to seven too…is he a dark horse?

Outside this the other two female candidates I haven’t mentioned Susana (Argentina) you would have to assume the UK would veto and hasn’t moved at all in the last three ballots as far as supports and detractors. Finally, there is Helen Clark whose discourage increased from 7 to 9.  If I was advising her campaign, I’d say time is up. Her best opportunity was in the 1st ballot when if she had come in the top three and then she might have had a chance but with the strong showing for Antonio there wasn’t the space for her to solidify support. Mark Goldberg editor of UN dispatch thinks her chances have gone from slim to zero (Radio New Zealand)