Are we about to have a new candidate for UN Secretary General? 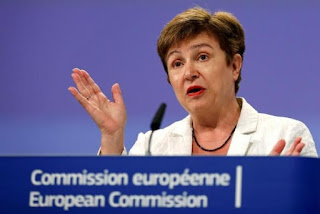 The election process for UN Secretary General is getting very interesting.

The UN is a wash with rumors of a late dark horse Kristalina Georgieva European Commissioner for Budget and Human Resources.

As she is also from Bulgaria it would mean that the either the Bulgarian Government would have to withdraw their support for Irina Bokova. Discussion was due to happen on Tuesday this week within the Bulgarian Cabinet to decide if they were going to switch horses. Or another rumor as reported in the Sofia Globe circulating is that according to a tweet by Talal Al-Haj, UN bureau chief of television station Al-Arabiya, Georgieva will be nominated by Hungary, Latvia and Croatia, with the support of Germany.

In previous blogs I had suggested that Bokova was a strong candidate for UN Secretary General she has done well in her tenure at UNESCO and of the candidates left in the race seemed to have a good chance. As I might say are António Guterres and Miroslav Lajčák

Kristalina Georgieva is not a new name to be linked to being the next Secretary General of the UN but with Bulgaria deciding to support Bokova it looked like that door had closed.

Devex who have been one of the news sources that have followed this story reported that when they approached a spokesperson from Bulgaria’s Ministry of Foreign Affairs on Wednesday they “responded to Devex’s inquires by pointing to the country’s February 2016 nomination of Bokova and saying, ‘this has not changed.’”

Bokova had been nominated prior to the present right of center government but that continued because the minority socialist ABC party in coalition indicated they would withdraw their support for the government if it did not support Bokova.

Reuters have reported that in the margins of the G20 summit in Hangzhou (China), the German chancellor tried to discuss with Russian leaders the possibility of a different Bulgarian candidate.

So a little about a possible new candidate for Secretary General. Kristalina prior to serving in the European Commission served a number of positions in the world bank including Vice President for Sustainable Development. She is widely admired and is aligned with the European Peoples’ Party (center-right grouping in the European Union).

In 2010 she was named "European of the Year" 0and "EU Commissioner of the Year". This was particularly for her work handling the humanitarian disasters in Haiti and Pakistan.

The ball now seems to be in the Russian court – are they prepared to have what could be seen by many as a WEOG candidate because she is a European Commissioner as the Eastern Block candidate?

As I’ve said before I strongly support regional rotation – there is perhaps another longer term question here on whether the Eastern European block still works and if it isn’t time to re-look at the regional representation and come up with a set of groupings that reflect the world of 2016 and not 1946.

The regional blocks by color

Finally, I would say that there are already very good candidates that have declared and have gone through a good vetting process by member states and stakeholders.

This is the most open process for UN Secretary General we have had and it would be a shame if then out of side field the position is given to someone who hasn’t been on the list. I think it is vital that this is sorted out before the next straw poll on the 26th September and that Georgieva – if she is going to stand – needs to be on that ballot.

If I was sitting in the Russian seat I have to say I would want something significant if I was going to give away the Secretary General position to a European Commission candidate. I’m sure the media will keep their beady eyes on this (Syria? Ukraine? Sanctions?). Add to this that we have in Donald Trump the most pro Russian candidate ever in a US election from one of the two main parties and this is as good as it gets for geopolitical hacks. 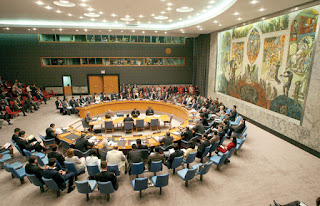