The answer to President Trump: Beyond 30

March 25, 2016
One of the great authors of the early part of the 20th century was Edgar Rice Burroughs best known for his creations of the jungle hero Tarzan and the heroic Mars adventurer John Carter. 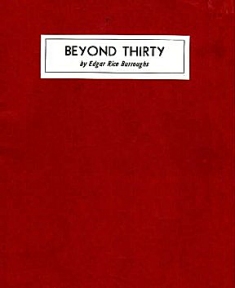 One of his least well known books in Beyond 30 (later called ‘The Lost Continent’) – written in 1915 and published in March 1916 – one hundred years ago this month.

The story was heavily influenced by the events of World War I, and it reflects U.S. sentiments at the time of writing. Many Americans were predominantly isolationist and did not want to be drawn into an European war. The story focuses around the US severing contact with Europe and then imagines a future in two centuries time, when for the first time the US comes into contact with Europe and the  rest of the world. 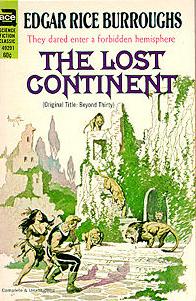 This short plot uses the same idea but in reverse. It imagines countries shocked at the possibility of the election of Donald Trump as President of the United States. They decide to ban together and to isolate the US - so that the impact of a Trump Presidency will not be felt by civilized countries of the world.
2017
As November 2016 approached the rest of the world looked  on in horror as Donald Trump, having taken the Republican nomination, was now closing in on the US Presidency. Informally the other G20 world leaders (now  I guess the G19) started to secretly communicate and put in place a plan on what to do if a President Trump followed through with his expressed policies.
Election day came and Trump won - taking all states where there wasn’t a significant black or Hispanic vote. The world held its breadth until the inaugural on the 20th of January 2017 – two hundred and forty-one years since the 13 colonies had declared their independence from the UK and two hundred and twenty-eight years since the US Constitution came into force. Was the US was about to come apart? In his inaugural the President reminded people of what he had promised in the campaign:

He had talked about having a deportation force and that you don’t need to go to the courts to remove people as he addressed America as their new President he said:
"They say you have to go through a huge legal process. You don't. They're illegal. If somebody walks in, they don't bring them to court, we will just send them back,"
On foreign policy:
“Free trade is terrible. Free trade can be wonderful if you have smart people. But we have stupid people.” He goes on and says: “If we want jobs in America, we need to enact my 5-part tax policy: kill the death tax; lower the tax rates on capital gains & dividends; eliminate corporate taxes in order to create more American jobs; mandate a 15% tax for outsourcing jobs and a 20% tax for importing goods, and enact the 1-5-10-15 income tax plan [four brackets with a top rate of 15%].
He then went on to say there will be now a:
“total and complete shutdown of Muslims entering the United States until our country's representatives can figure out what is going on.”
To underline his strength, he says:
“When someone crosses you, my advice is ‘Get Even!’ That is not typical advice, but it is real life advice. If you do not get even, you are just a schmuck! When people wrong you, go after those people because it is a good feeling and because other people will see you doing it. I love getting even. I get screwed all the time. I go after people, and you know what? People do not play around with me as much as they do with others. They know that if they do, they are in for a big fight….
The world is a horrible place. Lions kill for food, but people kill for sport. People try to kill you mentally, especially if you are on top. We all have friends that want everything we have. They want our money, our business, house, car, wife and dog. Those are our friends. Our enemies are even worse! You have to protect yourself in life.
One of the problems when you become successful is that jealousy and envy inevitably follow. There are people -- I categorize them as life’s losers -- who get their sense of accomplishment and achievement from trying to stop others. As far as I’m concerned, if they had any real ability, they wouldn’t be fighting me, they’d be doing something constructive themselves.”
Trump had spent the time between the election in November and the inaugural mobilizing his supporters into vigilantly groups to help police the round up the illegal immigrants. Thus was a process condemned by the UN General Assembly who had already previously condemned the Republican candidate’s assertion that all future Muslim immigration into the United States should be halted until the ongoing threat posed by Islamic terror can be more effectively dealt with. President Trump tells the UN to leave the US. They relocate to their other major HQ in Geneva.

Now the G19 supported by other countries act decisively. They had been preparing secretly and  now utilizing their satellites put an electronically dome over the United States. President Trump had in a strange way got his wish Mexico had indeed contributed to a wall – but this wall was to keep Americans in the US. Who had developed the dome? It had been Israel – through technology they had developed for the IRON Dome – much of it also paid for by the US. 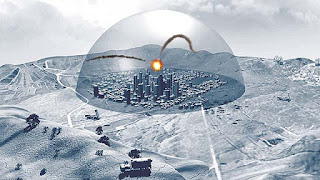 No boat, plane or missile could break the wall. The rest of the world wanted nothing to do with the US and so their move towards a more isolationist country was indeed embraced by the world but only in the context of the US. Paradoxically the removal of the US enabled peace to be possible in the middle east, climate change to be addressed, Europe came together as it became more obvious that being together would bring more benefits than being apart. The refugees that had left the US prior to the action were welcomed in all countries.

2216 – the Future World
Two hundred had passed since the US had been isolated and in the rest of the world a real intellectual, creative and cooperative world had become possible. The differences between religions had been embraced and respected. In the first fifty years after the US was isolated Countries were now a part of United Planets Federation as their eyes had turned to the skies.

As one of the star shuttles – Coldwater - starts re-entry to come in to land in Montreal one of the boosters is damaged and it crash lands in to one of the towers that was supporting the electronic dome. the result the dome power goes off in that section. Captain Turck lands the damaged shuttle in the outskirts of New York. He gets out with his three subordinates, Sinder, Taylor and Delcarte, while the crew try to repair the shuttle.  While they are out the Coldwater is successfully repaired but they can’t find their officers and so decide to go back to Montreal to get help and so flies off leaving the three behind.
Adrift, Turck and his companions are forced to enter into New York. They find it a wilderness inhabited by native Indians and overrun by lions and other animals. These animals were descended from those that were originally in the Bronx, Central Park, Prospect Park and Queens zoos. In a beautiful symmetry the Lenape Tribe of Native Americans had returned home to their island of Manhattan.

While out hunting Turck just outside Manhattan rescues Nool-a-mar-lar'-mo (living in water) who he calls Victory, who was one of the daughters of the chief, from a group of vigilantes. He tries to return her to her family, only to fall himself into the vigilantes’ hands. The two escape and flee to Manhattan, where they find evidence that the United States had fallen fully two hundred years before; the Great Civil War had destroyed the New World's civilization in less than a quarter century. 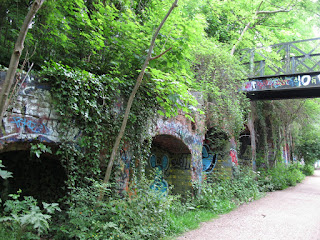 Outside of Manhattan and New York the US had become three separate governments. The first covering the states in the north east, the second covering those in the south east, the final one covering the western states. The land between them was now known as the badlands. It had fallen into ungovernable areas full of vigilantes from city to city each with their own empire This was the legacy of the Trump Presidency.

Meanwhile Turck finds himself exploring down the eastern seaboard and finding that these three different new governments had developed around a generally multicultural approach. The Trump Presidency had lasted last just a little more than two years. As people realized what he had done and that the US was now really on its own. The challenges to him took many forms with some states leaving the union and then battles on a scale that had not seen in America since the First Civil War. This included the first use of a nuclear weapon within the US taking out Dallas and New Orleans - devastating that part of the US and killing millions of people. 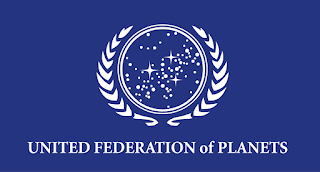 Meanwhile, back in Canada, Turck's subordinate Alvarez had rallied the United Planets Federation (UPF) to send in a rescue party. The ban on travel to the USA was rescinded, and a search and rescue expedition mounted. The UPF opened diplomatic relations between the three governments and the UPF and slowly brought the wastelands into a new Federation of States of America (FSA). Turck, now hailed as a hero marries Victory and moves to live in Manhattan.