March 28, 2016
Another sad day for the world of environment and sustainable development with the passing of Dr. Mostafa Kamal Tolba.

In 1972, he led Egypt’s delegation to the Stockholm Conference on the Human Environment which gave rise to UNEP. Initially he was appointed as Maurice Strong’s Deputy Director and took over from him in 1975 serving as UNEP Executive Director until 1992.
He worked tirelessly to promote the environment in the 17 years as Executive Director and built UNEP into a global voice for the environment.
The idea of a global commission on environment and development was first promoted by Canada in 1982 at the ten-year anniversary of Stockholm. This would become the World Commission on Environment and Development which subsequently birthed the Rio Earth Summit.
His work will probably be best remembered around the development of the Framework convention on Ozone Depleting Chemicals in 1985 and its subsequent Montreal Protocol reducing CFCs in the world in a very short time. Originally it was the British Antarctic Survey that found the hole in 1983, the Convention agreed to in 1985 and the Protocol in 1987 which came into effect in 1989 – a huge success.

“We are meeting to lay the groundwork for a convention that some argue may not be needed, for we cannot say with certainty that the ozone layer is being depleted. However, all the most reliable scientific evidence points to the fact that the earth’s protective ozone layer has been, is being, and, more importantly, will continue to be depleted by chlorofluorocarbons and other chemicals unless the international community takes preventive action. The urgent task of this meeting is to create a framework that will make that action effective. “Less than a decade ago, the problem of ozone depletion caused by chlorine atoms penetrating the stratosphere was hardly known. Now, following substantial research and monitoring, we are aware of a potential pollution problem of a scale and consequence never before faced." (Tolba, 1982)

In 1989 the UK hosted an Ozone Conference three months after the treaty came into force. I had the pleasure of attending the conference and in particular the press conference that followed where Mrs Thatcher more than doubled the UKs contribution to UNEPs funds. The famous exchange:

Question: The French Secretary for Environment said yesterday that he was not pushing for especially a new institution and it could be only the reinforcement of the United Nations Programme for the Environment. In your speech a little while ago, you said that Great Britain would double its contribution to the programme of Dr. Tolba's institution. What is the contribution of Great Britain for PNEU (phon)? You said you will double.
Prime Minister: For the environmental programme?
Questioner: Yes.
Prime Minister: It is comparatively small. It is £1.5 million—it will go up to £3 million immediately.
Platform Speaker (Nicholas Ridley UK Secretary of State for the Environment): One and a quarter!
Prime Minister: Well you had better put it up to £1.5, so it can go up to £3, hadn't you! (laughter and applause). It will go up to £3 million (applause). That will teach people to give me wrong briefing, won't it!


“We cannot wait for the international community to agree on a convention on climate change before we act. The need for immediate action is becoming increasingly pressing. The longer we delay, the worse the disaster will be for our children, and for our children’s children." (Tolba, 1990)

UNEP were not given responsibility for developing the UNFCCC some would say because Dr Tolba had pushed them so hard in the 1980s to do something on this that they wanted different hands facilitating the process. He continued to play a role but not the role he should have had.  I believe that was a huge mistake and that he would have taken us further quicker. But UNEP and he did play the critical role in the negotiations for the Convention on Biological Diversity. This was not easy as the US was opposed to the conference.

It was his (as Secretary General of the Negotiating Conference) and Ambassador Sanchez of Chile (Chair of the negotiations) non-paper that would in the final preparatory meeting in May 1992 prepare the ground for the final text. But this wasn't before a lot of pushing and pulling as Fiona McConnell (UK Chief Negotiator and soon to become Stakeholder Forum Vice Chair) pointed out in her book The Biodiversity Convention:

“Dr. Tolba continued to apply his bullying, cajoling, wheedling and threatening tactics. He was unwaveringly courteous to the US because, as he told us all, he did not want to give them an excuse to walk out. But to everyone else he distributed his contempt even-handedly. Japan was accused of taking up space and saying nothing. India was attacked for talking too much. Malaysia was ordered not to mention the GEF again. The UK was blinkered, mean and would not listen to Darwin if he were still alive. Brazil was interested in UNCED, not biodiversity Mexico should decide if it wanted to join OECD or stay with its G77 brothers. And so on. A laugh from Mr. Tolba in response to a proposal he did not favour was inevitably the precursor of an insult… (McConnell , 1996) 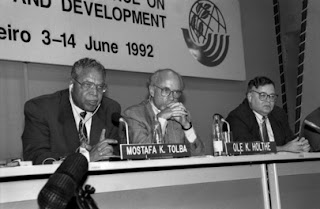 Without that i doubt if the Convention would ever have been agreed.

I had the pleasure of working with him during Rio+5 (1997) which he chaired. It was the most innovative process under the GA held for 15 years. It enabled stakeholders to not only attend but also to input to informals at the chairs discretion.
I was the coordinator of the NGO lobbying team for Rio+5 and we assigned different people as point persons for different political groupings and key individuals. For Dr Tolba his point contact was the great Bella Adzug a former US Congresswoman who had created the Women’s Environment and Development Organization (WEDO) in 1991. Those who will remember Bella will smile remembering this pair up. Bella was herself a force of nature -  it definitely created a colorful exchange when we lost speaking rights. 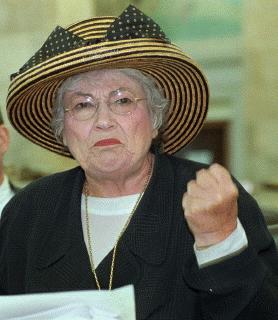 Rio+5 was to play a significant role in pulling back together the environment and development movement. It is possible that the Kyoto Protocol might not have happened without Rio+5 and it did play a significant role in reversing the ODA decline as Heads of State realized what has happening. ODA would only return to 1992 levels by 2002.  Rio+5 also prepared the ground for a new Summit in 2002. WSSD would ultimately not be successful in adding additional environmental goals to the MDGs as the impact on 9/11 was felt throughout the political arena.
Dr Tolba was to become one of Stakeholder Forums Vice Presidents and so over a period of years I was in communication with him about the direction of SF and what we should focus on. He with other chairs of the CSD and Stakeholder Forum Vice Presidents (Upton, Molden, Mayr) had attended the WSSD Conference where we held a retreat on how to strengthen the CSD. This ultimately became the proposal for a two-year cycle of the CSD. The first year reviewing what has happened the second year what policy changes needed to be taken.
The last time I saw Dr Tolba was in July 2009, Maria Ivanova brought together the five former Executive Directors of UNEP with others who had played a significant role over the last decades looking forward to a possible new Summit in 2012. Some such as IISD arguing against others suggesting this would be the right time to try and create a new narrative on sustainable development at the global level. 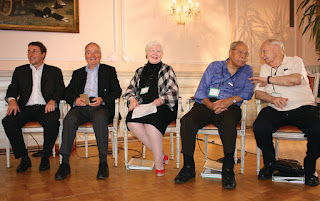 
Dr Tolba has shown great leadership on the environment throughout his life and we will miss him but we do remember and celebrate his great work as with Maurice Strong its their foundations we are building from. 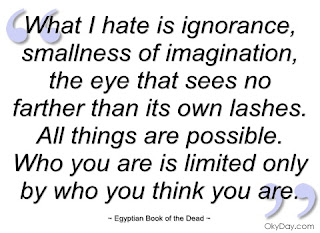