And the new Speaker will be....

October 18, 2015
Perhaps many people do not realize that the Constitution does not require that the Speaker be an elected House Representative, though every Speaker so far has been an elected Member of Congress. There's also no Constitutional requirement that the Speaker be a US citizen. The Speaker is also second in the United States presidential line of succession, after the Vice President and ahead of the President pro tempore of the U.S. Senate.

In other countries like the UK the office of Speaker is considered non-partisan. Maybe the US should consider going in a similar way as the House has become ungovernable. The Speaker of the House is a leadership position and the office-holder actively works to set the majority party's legislative agenda.

So to help the Congress with their decision on the next Speaker we thought we would suggest some ‘out of the box’ names.

Kanye West graduating from high school, West received a scholarship to attend Chicago's American Academy of Art in 1997 is an American rapper, record producer, and fashion designer but has already indicated that he will stand for President in 2020 this would offer him a  great chance to build alliance across parties.  Married to Kim Kardashian the House members would have to be aware they would become extras on episodes of ‘Keeping Up with the Kardashians’. Unusually Kayne had also announced his running mate for 2020 – Taylor Swift whose latest single seems very appropriate “Wildest Dreams”.  There would also have to be some adjustments to enable Kanye to continue to do his music writing and recording.  After all Paul McCartney compared Kayne West collaborations to writing with John Lennon he went on to say: “He is amazingly talented but controversial and can make eccentric moves. I realized if it didn’t work out we’d just say so and shake hands and leave.” The House might end up saying the same thing.

Newt Gingrich was elected to Congress in 1978 he as a congressman supported the Space caucus and in his Presidential campaign in 2012 called for a Mission to Mars. He founded the Conservative Opportunity Society he became the House Minority Whip in 1989. With the gang of seven he wrote the Contract with America which saw Republicans win the 1994 House elections. He was the highest ranking republican returned to Congress and so had an insider track to be the 58th speaker of the House of Representatives from 1995-1999 and so got to know the Clintons very well.  He worked with Bill on welfare reform, a balanced budget and the taxpayers relief act which included the largest capital gains tax cut in US history. Unlike other Republicans he has supported action on climate change in 2007 he said that he “strongly” supported the concept of a cap-and-trade system to address climate change, if packaged with incentives.  If Hilary wins in 2016 perhaps having Newt could be a great set of hands to build bipartisan support. As another of our other candidates said “My guest Newt Gingrich shut down the government during the Clinton administration. I'll ask him when it's going to start working again.” Stephen Colbert 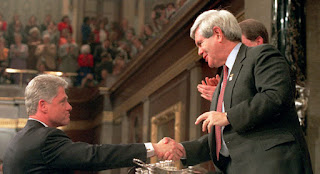 John Goodman played the Republican Speaker Glen Allen Walker in West Wing.  In 1986 Glen was elected to the United States Congress for Missouri's 6th District. He was re-elected seven times and would serve from January of 1987 until May of 2003. During his tenure in the House he would sit at times on the House Armed Services, Ways and Means, and Oversight and Government Reform committees.  Walken was a powerful Congressman who was heavily favored by the Republicans and greatly respected by most of the Democrats in Congress. As a result he had risen to the position of House Majority Whip in 1997 and in 1999 moved up to become the House Majority Leader. In December of 2001 he would be elected Speaker of the House of Representatives after the resignation of Speaker Jim Hohner. As speaker without a sitting Vice President he temporarily took over the Presidency from President Josiah 'Jed' Bartlet when his daughter was kidnaped. He showed great leadership and didn’t act partisan during his Presidency of three days. John Goodwin has gone on to play in Alpha House as a North Carolina Republican Senator Gil John Biggs prior to being elected he was the longtime basketball coach for the University of North Carolina Chapel Hill. His more liberal stances in recent episodes might cause problems for the Freedom Caucus.

Punisher might appeal to NRA members in congress as the Punisher is a right wing superhero. Frank Castle is an undercover FBI agent who becomes a vigilante assassin and sets out to unleash vengeance upon the corrupt businessman who slew his family and then goes on to hunt down and kill hundreds of violent criminals. Clearly the Punisher would be able to keep the Republican Conference in check. 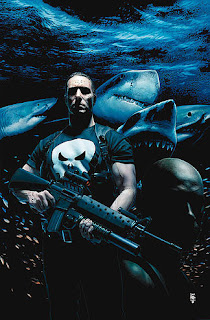 Stephen Colbert is ideal for the Speaker of the House having grown up on the Daily Show with Jon Stewart and progressed to the Colbert Report, which he hosted from 2005 through to the end of 2014. The Colbert Report parodied the conventions of television news. He hosted the show in-character driven news as an energetic right wing pundit.  Hosting shows from both the Democratic and Republican Conventions he knows many of the politicians and has a good relationship with Fox presenter Bill O’Reilly so should get support for a bid for the speakership from Fox. Having now been promoted to host the Late Show taking over from David Letterman he may be ready for the big time in politics – running the Republican Party.

“Facts matter not at all. Perception is everything. It's certainty.” Stephen Colbert