August 11, 2015
I had missed Bjorn Lomborg’s article in the Guardian "These are the four SDGs we need to agree on to help the planet" in the section sponsored by Business call to Action. I can only hope that someone else decided on the title as it clearly indicates a lack of understanding what a target and a goal is. This was as I am sure many of my readers would appreciate was because I was recovering from the over two weeks of negotiations on the final text for the Transforming Our World: The 2030 Agenda for Sustainable Development. I didn’t see Bjorn there at all maybe I missed him. 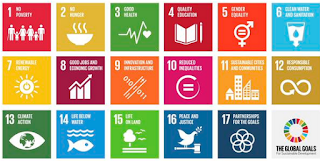 The article is recycling what he had said this time last year and is so out of date in its criticism of the SDGs you have to wonder if he has understood the process at all. The SDGs and their targets (other than some that underwent some technical fixing e.g. filling in the x’s) were decided last August. He takes a snarky jib at what was the most consultative and transparent process conducted by the UN for any global agreement:

“After a process of haggling and horse-trading, the UN has a working list of 169 targets – a whopping 151 more than the 18 MDGs that I believe changed the world. This is a mistake. Having 169 priorities is like having no priorities at all.”

There was a little haggling and horse-trading for the Declaration in the last few weeks of July but in most cases for the better see my review. In the case of the original SDGs and targets agreed last year the reason that we have 17 goals and 169 targets is because of what I have said a number of times. The MDGs were for developing countries and the SDGs are for ALL countries. The MDGs were just addressing development and the SDGs are addressing SUSTAINABLE DEVELOPMENT. The MDGs dealt with the impacts of policies and the SDGs address the root causes.

Bjorn suggests that for targets are the most important and claims because he has asked: “60 teams of top economists, including Nobel laureates Finn Kydland and Thomas Schelling, to evaluate the economic, social and environmental costs and benefits of the proposed targets,” that there answers in some way should be our guide.

I am not going to comment on the four targets because it’s not for self-proclaimed experts to decide these things but for national processes to decide which they want to priorities for themselves. What is critical for a country like Jamaica will be different Denmark will be different from India.

We have still a lot of the infrastructure for the SDGs to be put in place. This next 8 months the global indicators will be agreed. The next meeting is in Bangkok on October 26-28th of the IAEG-SDG group which will produce its report by December for a March UN Statistical Commission meeting. These will be a set of global indicators probably between 100-300. Each country will in addition produce its own set of indicators and stakeholders will be developing their own citizen data sets, industry their own versions of the indicators for their use in reporting. Bjorn is right some of the targets will be more cost effective in collecting data but that should not be the indicator – for far too long NOT enough money and resources has been put into collective more effective data and that needs to change anyway. Investing in data collection will help make better informed policy decisions in the future.

Over the next six weeks I expect to see more of these types of articles. What we should be focusing on is not the past debate but the future implementation of this transformational agenda.

Finally lets hope that the very good Danish PGA does not have pressure to undo the implementation of a universal, indivisible, integrated 2030 agenda by bringing Bjorn in!!! It would be a revisionist unleashed!