Greece and some lessons for all of us – do we need a global default?

July 06, 2015
Syriza’s win in the Greek referendum showed to the whole of Europe and the world that people will not stand for harsh austerity measures,. originally caused not by them but by the financial and banking sectors casino capitalism.  Remember the financial crisis wasn’t created by the people but by a small number from the finance sector virtually all of who have not suffered or found themselves in jail. 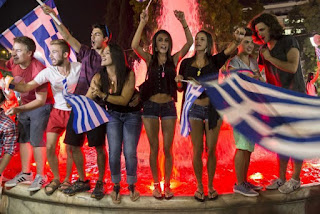 We are still experiencing the impacts of the financial crisis of 2008 and the medicine that we have been given isn't working. This includes reducing our pensions, our social service support and increase in unemployment particularly for the young..  Youth unemployment  was a driver for the Arab Spring and has also been a recruitment of ISIS (See  Fareed Zakaria CNN report). It has been one of the elements behind the challenge for Greece where youth unemployment stands at 60%. It isn’t alone in Europe there are similar problems in Spain (49.3%) and Italy (41.5%).

The conditions for what happened in Greece are ripe in Spain with Podemos who’s allies won in the local elections in cities such as Barcelona, Madrid, Valencia and Zaragoza  taking 25.69 of the votes if you add the socialists  and other assorted left parties nearly 68% of Spain voted against austerity. In Italy the 2015 regional and local elections solidified the left in power in many cities and regional governments

Back to Syriza for a moment they brought together a coalition of the youth, unemployed, fedup and poor when they got elected in January this year but yesterday’s referendum saw their support at over 61% that means that they have drawn from the center and center right of Greek society. 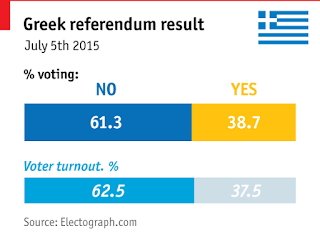 There are interesting  parallels of the ecological problems with the financial crisis. The banks and financial institutions privatised the gains and socialised the losses. We are doing the same with the planet’s natural capital. Our present lifestyles are drawing down the ecological capital from other parts of the world and from future generations. We are increasingly becoming the most irresponsible generation our planet has seen. The past 30 years have been characterized by irresponsible capitalism, pursuing limitless economic growth at the expense of both society and environment, with little or no regard for the natural resource base upon which such wealth is built.

The global financial crisis has provided abundant ‘teachable moments’ for politicians, policy-makers and the public to ponder a series of critical lessons. But clearly, too many of them have not yet learned enough. The real questions will be, first, whether we all learn those lessons, and then, whether we take the appropriate actions in time.

The bipartisan Levin and Coburn Report issued by the US Senate found ‘that the crisis was not a natural disaster, but the result of high risk, complex financial products; undisclosed conflicts of interest; and the failure of regulators, the credit rating agencies, and the market itself to rein in the excesses of Wall Street (Levin and Coburn, 2011). 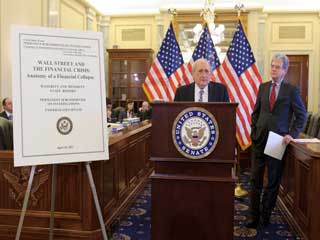 The majority of individuals running the developed world’s private and public financial institutions and the keepers of conventional wisdom in New York, London and other major developed country financial centres were virtually unanimous in acting as though they had repealed the laws of economics, and that growth in investments and profits could continue indefinitely, no longer restricted by macroeconomic conditions or local realities.

Global debt has according to McKinsey Global institute increased by $57 trillion or 17% by 2007. In the old days countries defaulted on their debts but in a globalized world perhaps we need to think out of the conventional box and consider a global default or reboot. This would create liquidity and enable governments to invest again.

It is important to remember that the reparations imposed on Germany after the first World War amounted to saddling them with a vast and unplayable debt. Their currency duly collapsed in the 1920s, and the wipe out of savings and social unrest thereby unleashed were a major cause of the rise of Nazism etc. Do the Germans remember that as they seek to impose harsh creditor-led conditions on the Greeks and to refuse to contemplate debt write-offs? Also remember that the Greeks also forgave the German state.

My friend Jeb Brugmann pointed out a great interview with the star economist Thomas Piketty in Die Zeit reminded people that German had a debt that amounted to 200% of their GDP after the war and in the London Debt Agreement (1953) where 60% of German foreign debt was forgiven.

On Monday even White House spokesman Josh Earnest said it is in the best interest of Europe and the United States for the Greek debt crisis to be resolved.The question is will Germany and others listen?  The US is getting closer to formerly disagreeing with the approach of Germany. If that happens expect some very tough comments from the Obama Administration.

There are critical problems we need to face over the next fifteen years. The Sustainable Development Goals have identified those, what the SDGs did not look at were the emerging new technologies and their impact. I have mentioned this in my blog before referring to the Canadian governments Metazone 2 and Metascan 3 reports. I suggested that we might see a loss of 2 billion jobs over the next 15 years due to these new technologies in five areas: power industry; automobile and transportation – going driverless, education innovation, 3d printers and robots. 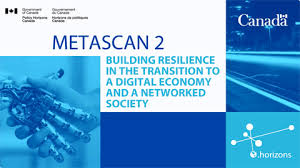 We need a world that can address these challenges and opportunities with enthusiasm, with innovation and with hope not one that is inward looking less secure, more dangerous and more violent. Thank you Syriza for giving us a chance to reflect and hopefully change direction. 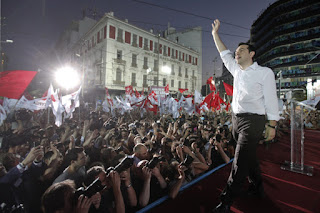