A guest blog from Jeb Brugmann: A Greek Tragedy in 6 Parts OR How northern Europe (also) avoids its systemic problems

1. IT STARTED AS A POLITICAL PROJECT, aimed at eliminating European nationalistic tendencies and ensconcing a single common market. All the parties involved were aware, if not also complicit, that the 'numbers' were being cooked to support the political project. To build Eurozone membership in the 1990s and early Aughts, creative national accounting was used to meet financial thresholds for entry (e.g.,3% deficit/GDP threshold). European statistical and financial institutions knew that the fiscal household in a number of countries was in poor condition, but chose to look the other way on Greece, Spain, Portugal and Italy. Germany and France themselves violated the 3% threshold in years leading up to the 2007+ global financial crisis (GFC). These facts are overlooked amidst today's theatre of self-righteous northern European finger-wagging towards Greece.

Meanwhile, the European financial institutions (and the IMF) have continued to cooked numbers to promote their failed austerity policies for Greece (see below). 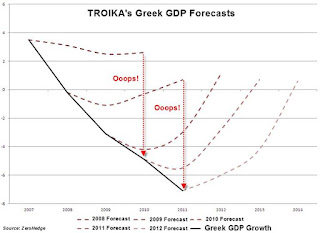 The bail-out troika's unreality about the effectiveness of austerity politics

2. THE EUROZONE WAS BUILT UPON A FOUNDATION OF WILD WEST FINANCE. In the same era as the Euro project, the deregulated banking sectors of the U.S. and Europe became masters of high-risk/high-profit derivative instruments, involving shell games of risk transfer and the purposeful obfuscation of financial realities and integrity. A well known case in point is Goldman Sachs' 2001, 2.8 billion euro debt swap with Greece--which included a currency swap allowing Greece to reduce the level of debt reported to Eurostat. “The Goldman Sachs deal is a very sexy story between two sinners,” said Christoforis Sardelis, who oversaw the swap as head of Greece’s Public Debt Management Agency from 1999 through 2004. German and French banks went on to make major loans to the corrupted, clientilistic Greek governments of both the traditional right and left. They knew that Greece's finances were a shaky house of cards, but felt protected by the strength of the euro and the complicit support of northern European governments and European institutions. Then the financial crisis hit--due to the now famous collateralized debt obligation (CDO) derivatives of the U.S. housing market (which had fueled a housing market that was building 60% more housing than the growth in the number of actual U.S. households)--highlighting the fact: it's a systemic problem, not a single-nation problem...

3. TRAGEDIES OFTEN INVOLVE A FORK IN THE ROAD DECISION. The northern European
governments and the European Union opted to bail out their risk-taking lenders instead of making them pay for their failed and irresponsible lending practices. To do so, they provided loans to Greece, Portugal, Spain and others to be flowed-through to the lending institutions. The lenders took a bit of haircut but effectively got bailed out. Meanwhile, fiscal austerity measures were imposed as loan conditions, on the heals of the GFC recession itself...thus driving these economies into depressions. In Greece, the decline in GDP has fallen further and for a longer period than during the 1930s Great Depression in the United States. (It took the opposite of austerity--protracted stimulus and then wartime spending--to get the U.S. out of those depths.) 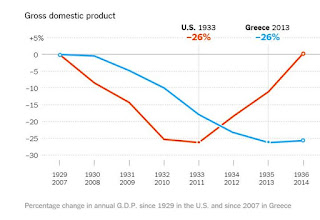 Post-GFC Greek economy under EU austerity (Source: New York Times July 11)
Fiscal stimulus was used in Germany, France, the U.S. and elsewhere to recover from the GFC...It worked in Germany.

Somehow finance ministries of certain countries find this to be an irresponsible option for Greece. Now they add a fire sale of national assets. What odds of recovery do London bookies give the latest scheme?

5. GREEK TRAGEDIES CAN ONLY BE AVOIDED THROUGH SYSTEMIC CHANGE...Moral hazard in the financial system has only been increased since the GFC. And it rests more with the system's creditors than with its debtors. That seems to be something much of the current northern European group of leaders still lacks the spine to address. They are more prepared to provide 'humanitarian assistance' for a deepening human crises on the continent than to muster this courage.

6. IS THE EUROPEAN POLITICAL PROJECT ITSELF NOW AT RISK? The last months' negotiations on the Greek debt crisis have evidenced increasing nationalistic sentiments, with classic utterances and tones of national-moral superiority, amongst both northern European political leaders and the populace. They are joined in self-righteousness by spokespeople from the finance industry. The hypocrisies and lapses in recent historical memory are breathtaking. What further tragedies remain in store?
Jeb Brugmann's latest book is