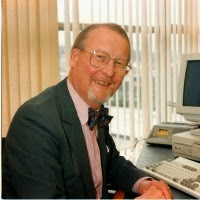 As an undergraduate at Surrey University I had the pleasure of seeing and experiencing our VC, as he liked to be called, during a difficult time when the government was  increasing tuition fees for overseas students and self financing students.


In March 1977 like other universities across the country we prepared to go into occupation over the tuition fees increase which would come in in September. I was elected to be Press Officer for the occupation which had been endorsed nearly unanimously at a meeting of over 1500 students. We then marched on the University Senate building where the University Senate was actually meeting about the same issue under its very able Vice Chancellor Tony Kelly.

A small group of us went into the Senate meeting room and informed those present very politely that we were now occupying the building and would not be leaving until the university refused to increase the fees for our fellow students. Some of the Senators were clearly unhappy one called us fascist but was calmed down by Professor Otto Pick.

Prof Pick was one of the stars of the university and a former adviser to Teddy Kennedy. He had been one of over of nearly 700 Jewish children in Prague who the escaped the Nazis helped by a British diplomat Nicholas Winton. Winton organized a total of eight locomotives to transport the children from certain death in Prague to London.

Prof Pick was someone you would miss your own lectures to listen to. He would talk about global politics as he had met and was friends with many of key players. Listening to him it seemed for those moments that you were transported to be an observer of global decisions. During the occupation he also led the support for the students among the Senators appointed by our VC and we would meet with him regularly through the two weeks of the occupation.

We had a rota for students to sleep on the Senate floor which we had also turned into an evening folk club venue. The most fun was that we also had turned the Vice Chancellors suite into the union coffee bar. He thought this was very funny and came in occasionally to get a coffee.We were SUPER careful about how we treated his office.

Although we had gone in with near full support there were clearly some against the occupation. We decided to put the Greek students in charge of security both to ensure our safety but also to ensure no one took anything that didn’t belong to them. I was very happy that we had done this as at the end of the first week the Rugby Club having had some drinks thought they would go over and stop the occupation. They never stood a chance! Oh I may have forgotten to say the reason why we choose the Greek students. This is because they had come to the university after completing their national service. There were a few bloody noises but none of them were students in the occupation. The Rugby Club never returned.

After two weeks in occupation the University made an offer of 50,000 UK pounds for a hardship fund to help any student in the coming year already studying to be able to continue their studies. Another General Meeting was called this time nearly 2000 turned up and we came out of occupation again nearly unanimously. Only one other University offered anything and that was Bradford who then changed their minds when the students had gone for the Easter break. Behind the scene it was our VC who was arguing with the government in support of not increasing fees for overseas and self financing students. It was our VC who somehow found in a difficult financial time money to support those who could not afford the increases. It was OUR VC who worked with the students and supported the cause because he cared about about us. Tony Kelly you wll be remembered by many of us.

Thank you for being OUR VC.