Republishing an interesting blog by Brian Merchan -- We Are Now One Year Away From Global Riots, Complex Systems Theorists Say 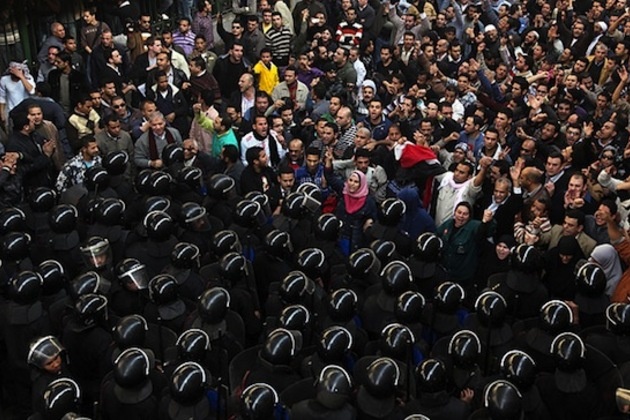 What’s the number one reason we riot? The plausible, justifiable motivations of trampled-upon humanfolk to fight back are many—poverty, oppression, disenfranchisement, etc—but the big one is more primal than any of the above. It’s hunger, plain and simple. If there’s a single factor that reliably sparks social unrest, it’s food becoming too scarce or too expensive. So argues a group of complex systems theorists in Cambridge, and it makes sense.
In a 2011 paper, researchers at the Complex Systems Institute unveiled a model that accurately explained why the waves of unrest that swept the world in 2008 and 2011 crashed when they did. The number one determinant was soaring food prices. Their model identified a precise threshold for global food prices that, if breached, would lead to worldwide unrest.
The MIT Technology Review explains how CSI’s model works: “The evidence comes from two sources. The first is data gathered by the United Nations that plots the price of food against time, the so-called food price index of the Food and Agriculture Organisation of the UN. The second is the date of riots around the world, whatever their cause.” Plot the data, and it looks like this:

Pretty simple. Black dots are the food prices, red lines are the riots. In other words, whenever the UN’s food price index, which measures the monthly change in the price of a basket of food commodities, climbs above 210, the conditions ripen for social unrest around the world. CSI doesn’t claim that any breach of 210 immediately leads to riots, obviously; just that the probability that riots will erupt grows much greater. For billions of people around the world, food comprises up to 80% of routine expenses (for rich-world people like you and I, it’s like 15%). When prices jump, people can’t afford anything else; or even food itself. And if you can’t eat—or worse, your family can’t eat—you fight.
But how accurate is the model? An anecdote the researchers outline in the report offers us an idea. They write that “on December 13, 2010, we submitted a government report analyzing the repercussions of the global financial crises, and directly identifying the risk of social unrest and political instability due to food prices.” Four days later, Mohamed Bouazizi set himself on fire as an act of protest in Tunisia. And we all know what happened after that.

Today, the food price index is hovering around 213, where it has stayed for months—just beyond the tip of the identified threshold. Low corn yield in the U.S., the world’s most important producer, has helped keep prices high.
“Recent droughts in the mid-western United States threaten to cause global catastrophe,” Yaneer Bar-Yam, one of the authors of the report, recently told Al Jazeera. “When people are unable to feed themselves and their families, widespread social disruption occurs. We are on the verge of another crisis, the third in five years, and likely to be the worst yet, capable of causing new food riots and turmoil on a par with the Arab Spring.”
Yet the cost of food hasn’t quite yet risen to the catastrophic levels reached last year. Around the time of the riots cum-revolutions, we saw the food price index soar through 220 points and even push 240. This year, we’ve pretty consistently hovered in the 210-216 range—right along the cusp of danger. But CSI expects a perilous trend in rising food prices to continue. Even before the extreme weather scrambled food prices this year, their 2011 report predicted that the next great breach would occur in August 2013, and that the risk of more worldwide rioting would follow. So, if trends hold, these complex systems theorists say we’re less than one year and counting from a fireball of global unrest.
But the reality is that such predictions are now all but impossible to make. In a world well-warmed by climate change, unpredictable, extreme weather events like the drought that has consumed 60% of the United States and the record heat that has killed its cattle are now the norm. Just two years ago, heat waves in Russia crippled its grain yield and dealt a devastating blow to global food markets—the true, unheralded father of the Arab Spring was global warming, some say.
And it’s only going to get worse and worse and worse. Because of climate change-exacerbated disasters like these, “the average price of staple foods such as maize could more than double in the next 20 years compared with 2010 trend prices,” a new report from Oxfam reveals. That report details how the poor will be even more vulnerable to climate change-induced food price shocks than previously thought. After all, we’ve “loaded the climate dice,” as NASA’s James Hansen likes to say, and the chances of such disasters rolling out are greater than ever.
This all goes to say that as long as climate change continues to advance—it seems that nothing can stop that now—and we maintain a global food system perennially subject to volatile price spikes and exploitation from speculators, without reform, our world will be an increasingly restive one. Hunger is coming, and so are the riots.
Follow Brian at @bcmerchant and Motherboard @motherboard, and on Facebook.